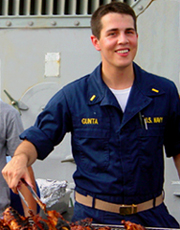 Look at this sailor boy, isn't he cute? And hungry. This is my Godson, and I want to make him popcorn balls for Christmas.
Last year the others got his chewy stash before he even stepped off the plane. Not that hiding anything from his youngest brother does any good. The boy has a nose like a bloodhound.

My touch for making popcorn balls has flown the coop, and if I'm going to spend the week before Christmas with my hands in a vat of hot caramel, I need a good recipe.
Dished by Jeanna on Sunday, December 17, 2006 4 comments:

Santa's got a brand new bag, and it's loaded with candy.
You've seen those holiday chocolate commercials. People treating shiny boxes of chocolate like bottles of Château Lafite-Rothschild.
But as William over at Chocolate Obsession cautions, you never know how old boxed department store chocolate will be.
How long do you think that Ferrero Rocher Christmas bell has been sitting on the shelf at Walgreen's?
Although I have nothing against Godiva, Ghirardelli, or my favorite drugstore chocolate, Lindt, I'd be reluctant to pay more than a few dollars if I didn't know how old the chocolate was.
Especially if someone, let's call him Phil, bought a $50.00 box of Godiva chocolates, then left it to fend for itself in a room containing two labrador retreivers. The one with the holiday assortment breath looked very much like Roscoe here

(left).The actual culprit, a known associate, was bigger, a little older, and suffered no serious side effects.

I suspect the active participation of the "smart one" (right).
There are a lot of candy gift boxes out for Christmas, and who doesn't enjoy a Whitman's Sampler under the tree.
The point being, if you're going to spend $50.00 on a box of chocolates, don't gift wrap it for your dog. No, wait, the point being, you don't know how old most gift boxes are, and as William points out, freshness is key.
Even if you don't know your neighborhood confectioner the way people used to know their butcher, support your local candy maker. Do a sweet search. Type in "chocolatier" and your city and state—enter the name of a larger town if you don't get results. We have some exceptional ones in the Madtown area. (Candinas, The Chocolate Caper, James J., Gail Abrosius) Take that, Milwaukee.
And if your dog has a sweet tooth (see previous entries on dogs and candy), try treating your expensive chocolates like food on a camping trip.
Dished by Jeanna on Wednesday, December 13, 2006 3 comments:

Hanging Out on the Candy Corner 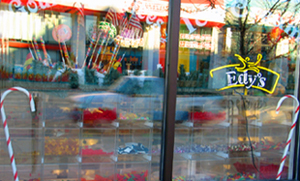 Quit fogging up the window and come in.
You'll find owner Jeremy Schertz emersed in a huge Christmas order and surrounded, as always, by candy.
Jeremy is the one who introduced me to Pucker Powder four years ago when the Candy Corner first opened. Today the store was trimmed in 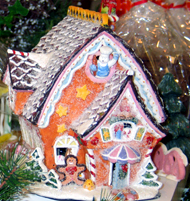 gingerbread houses, santas, and salt water taffy garland. I find something new every time I go. I picked up large chocolate clusters I thought were pecan caramel turtles on this winter visit. Turns out the très chewy treats were something I didn't know you could do with gummies and chocolate.
"This Christmas is the first time we're making homemade seafoam," says Jeremy.
Sounds delicious. But the rack of cola Pez, and a personal tour of the Fear Factor candy line were more down my Gingerbread Lane.
This foul stuff has its own wall in a newer section which will be further renovated. The area now includes a lollipop stand, exploding ice cream, and a display of pink cuddly things staring across at the candy roaches.
(Who do I know that would appreciate a Fear Factor Candy Challenge game this Christmas. The commercial is on the same page. The Joyride website will also tell you how to host a SICK a ning house party.)
The Candy Corner had Fear Factor candy out early last spring, putting them ahead of the crowd. I've handed out a fake bug sucker or two, so it was hard for me to grasp that not only fear, but bug larva is the factor.When the back room goes through its metamorphosis, it will be called Carnival Cravings. This is because it will have fair foods. You know, stuffed pretzels, caramel apples, cotton candy, and funnel cakes, while keeping the ice cream and Fear Factor bits of nasty.
“We’re getting a lot of new Fear Factor candy in. It’s so popular we’re going keep it," smiles Jeremy. 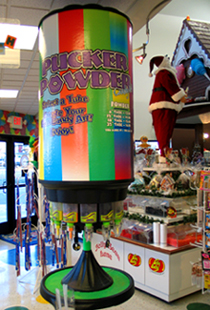 They'll also be filling the buttery void left by their neighbor, Kernel Popcorn's. (Sigh. A wonderful place, hope to have more news on them soon.) Jeremy says they're doing a whole new thing from the Kernel's. Does that mean no more black licorice, barbecue cheese, cheesy baked potato, cheezy caramel, double cheese, jalapeno cheese, and pizza cheese popcorn?
"We're doing a lot more cheeses," he says.
That I'll have to see.
And what of black licorice popcorn?
"We are doing as many kinds as we can,” he laughs.

And having many flat screen TVs. All around the store. Someone up in Rapids is making a new video for them about a kid who sneaks into a candy store and stumbles onto a secret chocolate lab.
The Candy Corner was recently featured in Treasures of Wisconsin, available at the local Barnes and Noble.
Jeremy, who started working for other Dell's candy stores at age 16, takes the Christmas order—did he say something about a thousand pieces of chocolate—and the ambitious Carnival Cravings in stride.
Adding, "It's going to be a big job."
Bring on the exploding ice cream. Which btw, is Mini Melts with Pop Rocks.

Horsing Around in the Dells

A bitter wind and some holiday cheer blew along the Dells drag yesterday.
Stay tuned this weekend as we talk to the Candy Corner's Jeremy Schertz about revnovations under the Glockenspiel.
Dished by Jeanna on Friday, December 08, 2006 3 comments:

'Tis The Season (For Fruit) 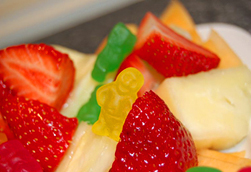 Yes, I said fruit.
Move over fall holidays, take a hike wax fangs, it's sugar plum time. Sugar plums, btw, are also a fruit.
Are you longing for a Christmas platter piled with cookies, ribbon candy, peppermint puffs, chocolate kisses, and figs.
You heard me, figs.
I'm old enough to have parents who are old enough to talk about the delight of an orange in their Christmas stocking, so the idea of fruit as a delicacy has become ingrained. The cravings seem to peak in the summer, and...right...about...now.
Why is that?
A Pavlovian response to the crates of oranges and grapefruit we get from Florida this time each year? The fruit orgies of dates, pomegranates, tangerines, grapes, star fruit, and prickly pears from the Christmas tables of my childhood?
Or is it because, as a study done last summer at Cornell University would have us believe, people who love candy, also love fruit.

The Sweet Tooth Study
This study involved thousands of test subjects, dividing the sugar people from the salt people, then the veggie people from the fruit people.
They found a major link between sweet eaters and fruit consumption.
It turns out that sugar lovers, like ourselves, go for fruit over salt. And not surprisingly, fruit lovers eat more sweets than veggie lovers.
The idea is that the same craving which tells you to eat a pack of frozen Snickers, also directs you to the fruit aisle in search of a Cripps Pink.
This explains why I eat Dots with apples, but what about the desire to pour Jujyfruits and Sour Patch Kids into popcorn? (Warning, that Sour Patch link is a little trippy.)
Getting back to the study by Cornell Food and Brand Lab director, Professor Brian Wansink, he's a food psychologist and really wants people to eat better. Knowing that we may just as easily eat a banana as a bon bon gives the healthy types hope for us sweet tooths.
So let's show Professor Wansink what candy lovers are made of.
(Sugar?)