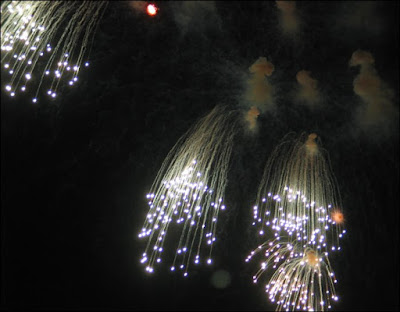 Nanci was at Brat Fest I was in Burlington teenagers were skulking on park benches Guido and Vince were eating chocolate covered bacon and chili suckers. 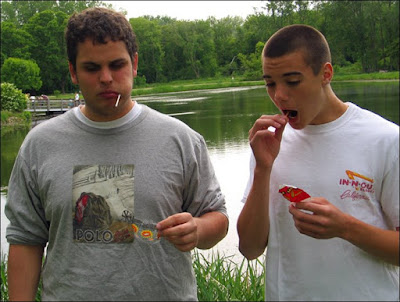 While Andy tried his chili sucker, Vince's Dulces Karla Jilotes Grande Chile never touched the inside of his mouth, and he claims to like spicy food.
It's just as well according to this article from the wire on lead in Mexican candy. Wish I would have been armed with that little tidbit before I hit The Expo. Take a whirl around the Food and Drug Administration Web site and you may never eat again. 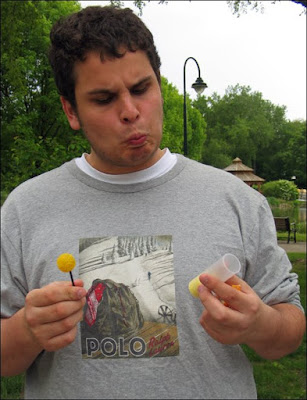 A sucker dipped in sour lemon powder
Oh don't feel sorry for him, if you only knew; not too long ago he was grabbing my purse and dumping its contents on the floor of the Cub Foods check out line. 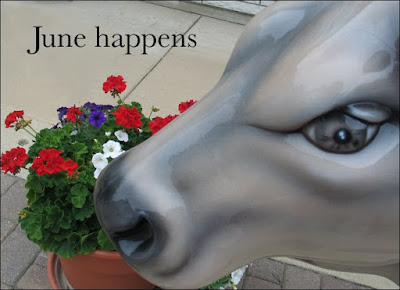 While I was lost in the month of May, June happened.
Who out there would buy a dairy cow t-shirt that said, "Kiss Me, I'm Lactating?" 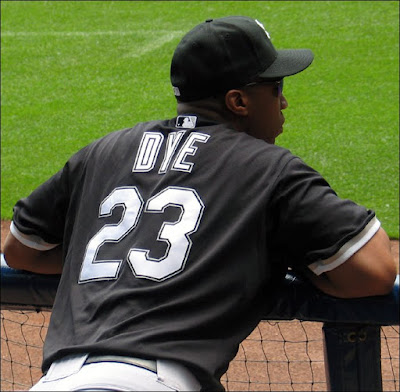 One of the most exciting things this June was when the White Sox came to Miller Park and properly spanked the Brewers. Twice.
NOTE to the unattractive man in the second row left of the visitor's dug out: Chill the f*&@ out, I have a point and shoot camera without a telephoto lens and I will obstruct your view of J.D.'s butt for a full 1.3 seconds while I take his picture. 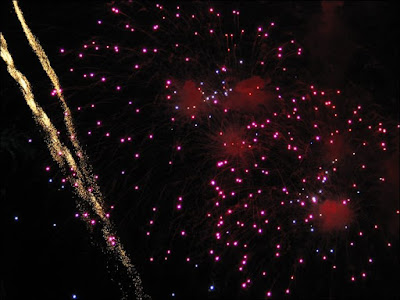 The very end of June means the Largest Firework's Display in the Midwest, Rhythm and Booms.
This is what fireworksguide.com said about it:

Rhythm & Booms is Madison, Wisconsin's premier Independence Day Celebration and fireworks display. As the "largest fireworks display in the Midwest", it easily surpasses other fireworks events in Chicago, Minneapolis and Milwaukee because of the length of the show (approximately 35 minutes), the number of shells fired (15,000) during the show, and the size of its annual budget. It is the largest single-day event in Wisconsin. 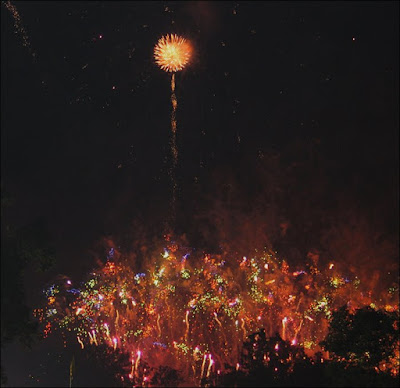 Take that Chicago, Minneapolis, and Milwaukee.
The very end of June means not venturing too far from home for fear of running into a buzzing swarm of pyromaniacs and their ghastly hive of traffic. 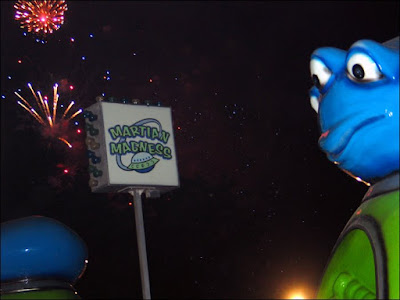 The crowd seemed a little different this year

Rainy weather caused a cancellation and moved the fireworks from Saturday to Sunday. That allowed me to score a couple Mallards tickets, see the game, and nurse a cooler full of consumables that lasted until the last shell was shot and the last song was sung. 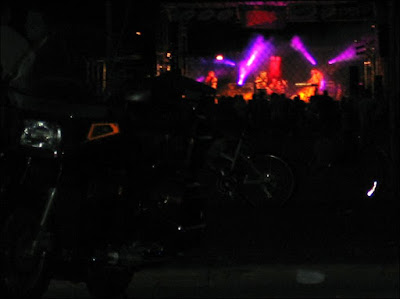 Little Vito and the Torpedoes vs. The Booze Brothers would be a great cage match

Weren't Little Vito and the Torpedoes in their late 20s and 30s when I was sneaking into the Shuffle Inn as a teenager? I say this with love. Hell, all I did was eat, drink, watch baseball, and pet dogs, and I was wiped out. You go, Little Vito and your Torpedoes. 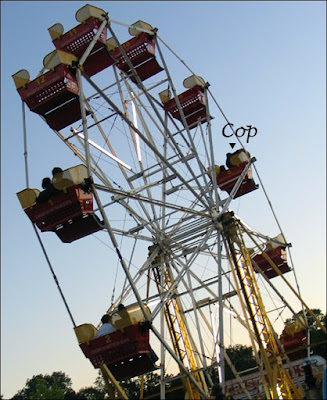 Cable on this ferris wheel snapped while Madison's local news media ate funnel cake and cheese curds.
Everyone was all right, but somehow a policeman got caught up on one of the cars, dangled out of his seat, and dropped down to a freaked out kid a few cars below.
I got there while firemen were rigging cables to pull the cars down one at a time. 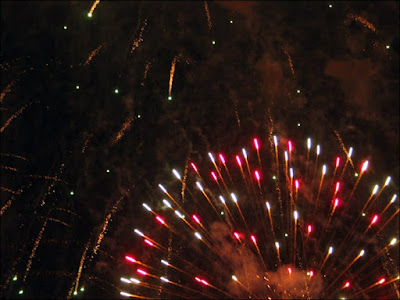 Things I learned at this year's Rhythm & Booms:

Don't eat anything, ever

Old rockers never die, they keep playing until you can take a left on Sherman Avenue
Dished by Jeanna on Sunday, June 28, 2009 8 comments: 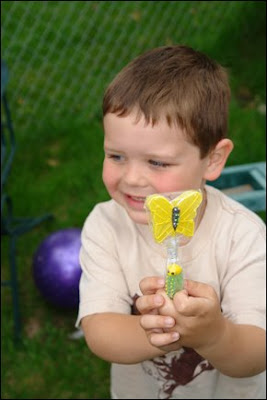 want to thank Jeanna for sending an assortment as bizarre as myself. 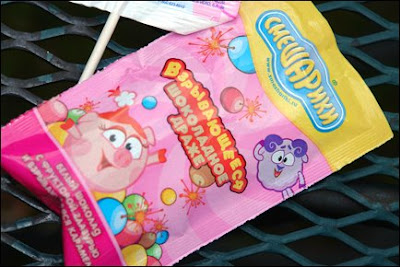 One of the strangest things sampled was the pink package with pigs and explosives on it from Russia. This package held fruity, milky malted milk ball like candies, packed with a pop-rock like substance on the inside. It was an unusual combination that left the testers as excited as those cute explosive pigs. 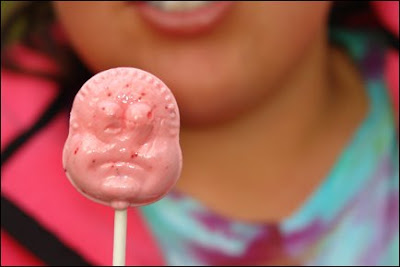 e were also sent an assortment of suckers, the tastiest one being a "virus" flavored one. On the inside, was a face shaped sucker that when licked, bled from what appeared to be sores.
It reminded of all the kids in high school who had bad acne for some reason. The thought may be less than appetizing, but it was a funky sweet and sour mix of tongue lashing goodness. 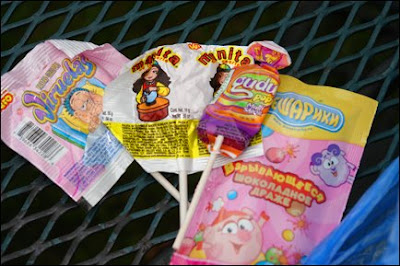 The manita was shaped like a hand and had "fin de tu problemas" (the end of your problems) embossed on it. I saved this one for myself and what do you know, all of my problems, like this candy have disappeared!

DISH NOTE: No pigs were harmed in the posting of this entry.
Follow the poignant adventures of Ms. Mamma on her blog and Web site.
Dished by Heidi on Monday, June 22, 2009 10 comments: 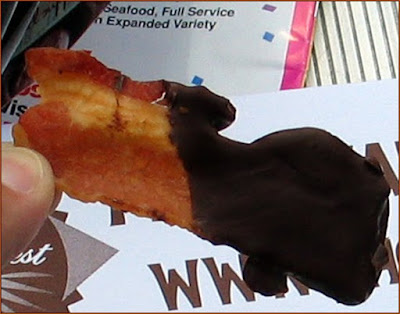 quickly the days fly by when you're eating pork fat dipped in cocoa butter.
To recap Memorial Day: Nanci was at Bratfest, I was at ChocolateFest, teenagers were skulking on park benches, and Vince and Guido ate chocolate bacon. 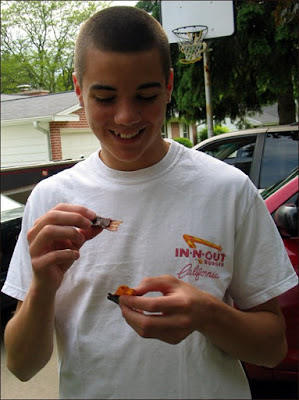 Vincenzo is a good sport (except when it comes to Fantasy Football but we won't talk about that), although he drew the line at All Candy Expo Bertie Botts dog food flavored beans.
Roscoe, imprisoned on the inside looking out, seemed up for it—at one point he broke free, ran around in a circle, and sniffed the car for Frisbees and foodstuffs. I'm thinking his cousin, Cujo, may give it a go.
Vince ate the chocolate dipped bacon quickly, without sniffing, but was one and done after that. And there were so many other treats to try. I'm sure Lisa will be more adventurous. 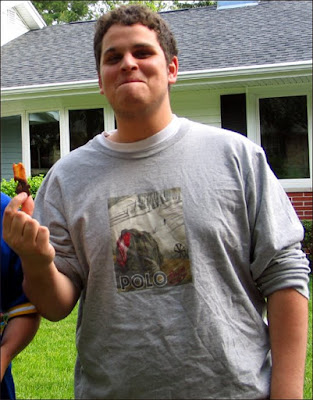 When Andy was a baby Guido he made me eat Jelly Belly "cocktails" served from dirty pockets and sticky kid fingers. Don't feel too sorry for him, he owes me.

If the Photobucket video above doesn't load you can find it here, or here, if you prefer YouTube.
Next Up: Heidi
Dished by Jeanna on Monday, June 15, 2009 16 comments: 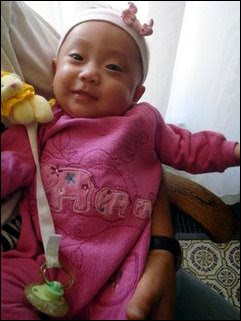 Little One was excited to see a parcel from Jeanna arrive the other day. Oh, what a tough job it is to have to taste test and review all this candy! 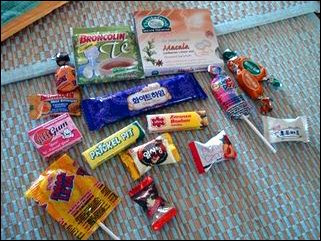 First up: Plantafresh Breath Freshner. For fresh breath. You know, because breath "freshner" is supposed to give you fresh breath. I was wondering if the company really intended to misspell freshener. I guess freshner sounds so much better. 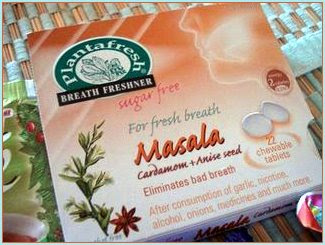 This interesting sugar free chewable tablet is supposed to eliminate bad breath. It is Masala (cardamom and anise seed) flavoured. Apparently it is to be used after consumption of garlic, nicotine, alcohol, onions, and much more. Can one really consume nicotine? That sounds rather hazardous to me.
The Masala tablets remind me of the fennel seeds in the little bowl by the cash register at Indian restaurants. It was only a few years ago that I realized one was supposed to take a pinch of the fennel seeds and chew them after the meal to freshen one's breath. I guess this is similar in concept.
Neat to try, but I don't think I'd make a habit of buying these. If one chews these after smoking, it may very well make them want to quit smoking, or smoke even more. 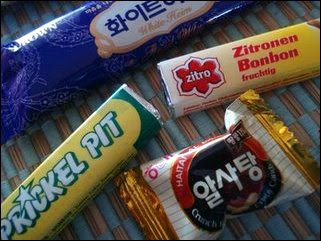 Mah Mama always said...Never eat anything that's packaging has been previously opened or anything you can't read. This does not only apply to Halloween candy.
Many of the candies that Jeanna sent were written in languages foreign to me. I deduced that some of the Asian candy came from Korea. I've taught enough Korean students to recognize the Korean characters on the packaging.
I took a stab in the dark (kept my eyes closed and fingers crossed) when sampling the Korean nut candies.
The Hatai Crunch Candy tasted a combination of sweet and nutty. It reminded me of eating crunchy peanut butter. The nut candies had to be consumed ASAP since our nieces are allergic to nuts. I also did a clean sweep of the area to get rid of contaminants. Seriously.

GLEE GUM: Oh joy! Oh rapture! One has to scratch one's head when the packaging for bubble gum reads "bubblegum flavor." As opposed to...?
As the makers of Glee Gum say, "Chew with Glee, naturally." I have to admit that I like the idea of a gum with no artificial flavours, sweeteners, colours, or preservatives. What I find even cooler is that the company has Make Your Own Candy Kits. How cool is that? I'm going to have to order some kits for when I go back to teaching when Little One is a year old. Yeeeeahhhh. Any teacher who teaches kids about The Sticky History of Chewing Gum, The Gooey Tale of Gummies, and The Sweet Saga of Chocolate is by far the coolest teacher ever. 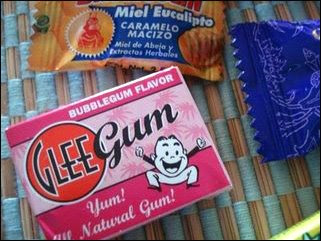 The gum was actually better than I thought it would be. Not as soft as Bubalicious, but not as jaw breaking as Bazooka Joe. 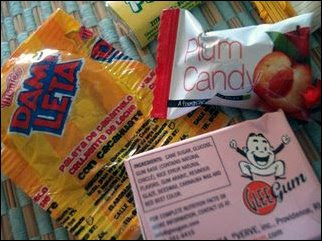 I must confess that I didn't actually try the Plum Candy or the other unnamed mystery candies with Korean (?) writing on the wrappers. Why? I'm chicken. I just was so unsure, uncertain, and hesitant. I'm going to get Hubby to taste test them and review them. He'll do it. He's crazy like that. 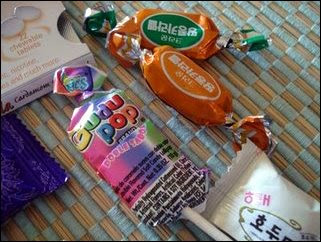 I do have a reason for not trying the Plum Candy. I like to think that since I've traveled to eleven countries, thirteen American states, and four Canadian provinces, that when it comes to sampling international cuisine, I am pretty open minded. Well, I already know I don't like Plum Candy. I don't like plums. Period.

In Japan, they've got plum beverages and garnishes. They are just so sour. My Japanese friends and students looooooooove plum things. Me, not so much. This is the same in China. My Chinese relatives enjoy dried plum candy. Ever since I was a kid, I can remember always pretending to like it just to appease people. That stuff is nassssstay. I mean, huge pucker power!

I did really enjoy the White Heim (in the purple wrapper). It's a Korean treat and it translates into the Engrish "White Angel." It's a wafer-type treat that is light, airy, and delicately sweet. LOVE IT.
There were also a bunch of random candies thrown in there with Spanish and German writing.
The Miel Eucalipto was a pleasant surprise. The honey caramel and eucalyptus candy came in handy with my throat being rather croaky this week. 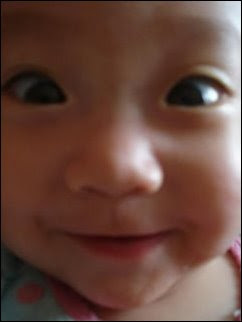 "Did you say CANDY?"
This is Little One hours after I sampled all these candies for Jeanna.
Can anyone say sugar rush.

DISH NOTE: This is more candy from the evilbottomlessbagofsugar and the All Candy Expo. You can find Chrissy and Little One up yonder at Random Thoughts and Musings from the Island.
Dished by Chrissy on Thursday, June 11, 2009 12 comments: