Burning your tongue on a large mug of Toffee Caramel Hot Chocolate is a great way to wind down the Halloween season while watching Carrie and remembering how you screamed the first time you saw that Oscar winning hand grab Amy Irving.
This way-too-sweet drink comes from Pelican Bay LTD courtesy of the World Market, now in Middleton's Greenway Station—is it a shopping center, is it a railroad station?
The mix is wrapped up as an ice cream cone (full of dark and white chocolate, marshmallows, milk powder, nuts, and toffee). They call it a "snow cone," I call it compensation for not being able to trick or 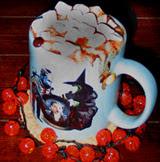 treat without snide remarks.
One thing you may not remember from year to year is that the marshmallows and whatever other sugary bits of excess you want to toss in your Wizard of Oz cocoa mug should be consumed as a solid. It's a texture thing. You get to make more of a gooey mess that way, it tastes so very much better, and becomes almost unbearably sweet if you let it blend into a tepid brown liquid. And like the Wicked Witch, hot cocoa topping melts quickly, especially when slurped near a fireplace or castle torch.
As much as I like the idea of a piping hot chocolate sundae with nuts in a mug, there's no beating this Candy Lover's Hot Chocolate recipe from Scharffen Berger.
Dished by Jeanna on Wednesday, October 31, 2007 1 comment: 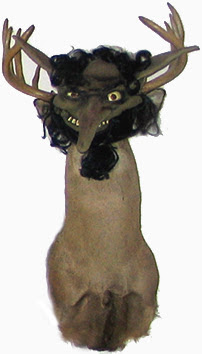 This was going to be about a Halloween packet of hot chocolate I found at the World Market. Then it hit about 70 degrees, yes, the end of October, in Wisconsin, 70 degrees. Talk about frightening.
So I ended up watching my cousin's flag football team in Pine Bluff and came across these delightful items mounted on the wall behind the bar at the Red Mouse (formerly Kit's Korner)—where the bartenders couldn't be nicer. What says Halloween in Wisconsin like masked deer mounted on a sports bar wall? 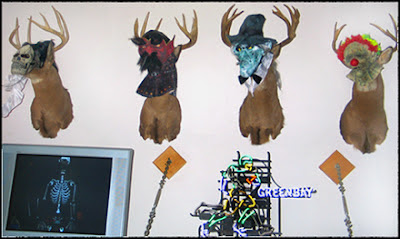 From The Mailbag: Gollum Boy 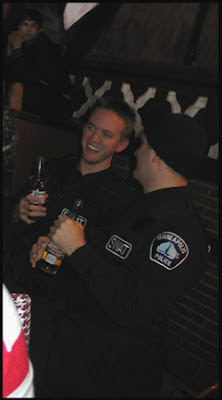 Answers to Questions From The Mailbag:
• I meant the kid to the upper left in the photo, he was sitting on the ledge near the exit for outdoor seating at State Street Brats. Busing tables, pretty spry, and quite polite.
Let's hear it for the Minneapolis SWAT team. Way to loosen up with bottles of Corona, boys. At least you weren't drinking Corona Light. (The cute cop on the left reminds me of my godson.) Here's what the real MPD look like.
Unfortunately my Reno 911 and Hot Fuzz photos didn't turn out.
• I don't know if I will be going out for Halloween this week to take more photos. I'm sure there'll be something going on, but nothing like the night before and day of Freakfest.
• My favs were The Cat Lady from The Simpsons and the incredibley odd Tree Gnomes. Oh, and the Dick In The Boxes.
All my photos from The Night Before Freakfest are up now.
Dished by Jeanna on Monday, October 29, 2007 4 comments:

Maybe this isn't a Sugar Buzz, but it's some kind of buzz: Freakfest 2007 unofficially began on State Street last night with the stadium lights blazing (the better to take pictures with) and the Orwellian disembodied voice both welcoming and warning us in the same creepy breath. We glued ourselves to the barstools outside State Street Brats until about 40 minutes after my camera battery died. Oh the pictures I could have taken! We'll see if I can make it to the insanity of the actual event tonight.
A shout out to the bartenders, brat guys, and even the spritely bus boy perched Gollum-like on a ledge near the side door at State Street Brats. It was yummy blue green instead of blood red shots this year, and even yummier bartenders named after the shots they served. Think Surfer On Acid. 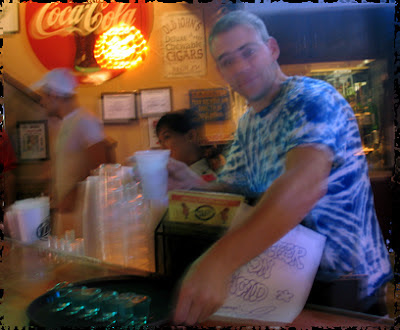 I suppose it helped that this is Homecoming weekend (we're playing Indiana rather than one of the local high schools like last week—the score was 27-3 in the middle of the 4th when I posted this). Because I promised perfect strangers I would, here is a link to my flickr Halloween on State Street 2007 photos. I'll be adding more over the next few days.
Dished by Jeanna on Saturday, October 27, 2007 2 comments: 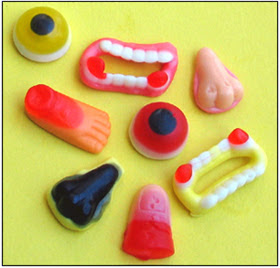 Unwrapping a gummy body part is like unwrapping cheap air freshener in a dorm room. There's too much packaging and it reeks. Not unlike dirty underwear in a garbage bag (or body parts in a body bag), Gummy Body Parts are best left wrapped in plastic. Instead of a rolling up a wet towel, shove a bag of these sick puppies under your dorm room, hotel room, fill in the blank room door.

Roscoe, the sick puppy poster boy, has my cousin Phil looking for something to keep the beast from eating things (like an extra large homemade pizza cooling on the counter) not meant for dogs, Steelers fans included. I think surrounding the perimeter with a few Gummy Body Parts will do it. Although they smell vaguely like pineapple and Roscoe here loves fruity hair care products...
I'd rather listen to the Dual-Action Cleanse infomercial the morning after Dollar Taco Night in a communal bathroom than have a heaping helping of Gummy Body Parts (35 Calories, No Fat, 5mg Sodium, 8g Carbs, 5g Sugars and yes, 1g Protein per part). I dread to think what they look like plastered on your colon wall.
The best way to eat a body part is quickly. That way you don't have to smell them and it's over like a flaming shot, though scarier.
The teeth are a little easier to force down because they're smaller, or thinner, or maybe it's the idea of teeth eating teeth. Wait for the right moment to have fun with that concept.
Dished by Candy Jones on Thursday, October 25, 2007 7 comments:

The China made Walgreens Confectionery Lane Horror Gummy Tongue tastes like sugar coated fruit roll ups. There's not much more to say about these semi-creepy organs except the plastic vampire teeth they come clamped in are a nice touch and there are two in a pack weighing 2.5 ounces. They're thick. Thick as a brick. They taste as if they should be healthy (or used for chimney repair) but in reality, not so much. There is some citric acid pressed in among the corn syrup, gelatin, and pectin, but it's no surprise that something which uses "Artificial Fruit Flavor" as a selling point also contains: 110 Calories, 25g Carbs, and 18g Sugar per tongue. And say "hello" to our friends Yellow 5 and Blue 1. "Hi der." 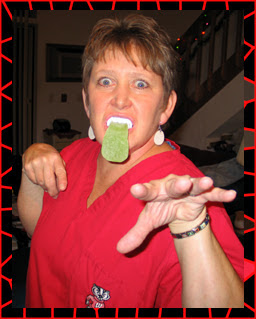 Nanci, cousin and Candy Dish Man Ray, described her tongue simply as "Ich."
Much more interesting than the Horror Gummy Tongue is a Web site called i-mockery.com and their Two Months of Halloween celebration. They found a far cooler gummy tongue over there (Alberts Gummy Candy Tongue Ghouls, the second tongue shown via the link in the Llamas entry) as demonstrated by a cute but scraggly young man wearing a paper Gedney pickle hat, fangs, and fly goggles. We'll call him "Rog."
Hoorah for you, I-Mockery's Halloween Grab Bag. I'll tell you up front, their Ultimate Guide To The Halloween Candies of 2007 is far better than anything we'll come up with. But I'll be taking plenty-o-Freakfest 2007 photos, and this year be bringing enough cash to keep warm. I'm already thinking of the tantalzing tray full of red shots which circulated through the Brat Haus beer garden last year.
Mmmmm, red stuff.
Dished by Jeanna on Monday, October 22, 2007 2 comments:

It was bound to happen—I've got too much sugar in my diet. And the Sahara is a little sandy. The funny thing is, I'm supposed to give up milk and juice, but no one said anything about candy. And don't eat too much fruit they tell me. Then the nurse says something to the effect of, "I don't think that will be a problem for you."
So I reported her to the Italian Dairyman's Association and they stuck a box of decapitated cheese cows under her pillow. 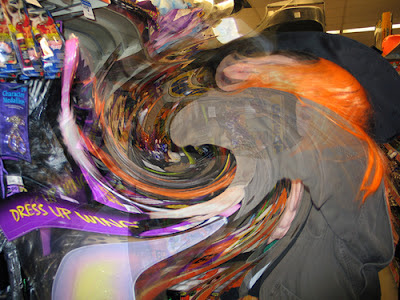 I went to the Mount Horeb Fall Festival in search of Norske sweets anyway, and just as my cousin (pictured above) called and asked between groans (she was listening to the Badger game) if I'd seen any llamas and I asked her if she'd been drinking (a safe bet for anyone who shares our bloodline) there they were. The weed face below is named Kiwi. Is there no escaping the evil grasp of fruit? 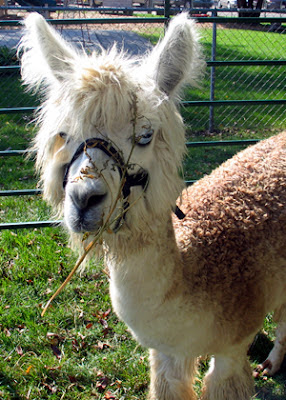 I was too depleted from the lack of sucrose and 86 degree October weather to continue my search for Norwegian sugar, but to celebrate the new diet I traded in my bag of Craisens for a bag of gummy body parts from Walgreens. They're nasty and taste of citrus (again with the fruit). I've had a nose and a few eyeballs that look like this photo, but I haven't been able to take any pictures of my own—laziness, a life laced with a little too much crazy, I and won't talk about my hillbilly neighbor who daily hoses off her balcony and ruined photos I was trying to shoot. Let's call her Britney. Coincidentally her "K-Fed" "moved out" recently, although he's not above the four day weekend booty call. You didn't hear it from me.
And speaking of gummy body parts, a quick search brings up a Sour Patch Chewy Candy Tongue—which now I must have—mango Crazy Hair, and a game called "Eyeball Splat." Maybe I can have some Crazy Hair if I don't drink my milk.
Dished by Jeanna on Tuesday, October 16, 2007 2 comments: