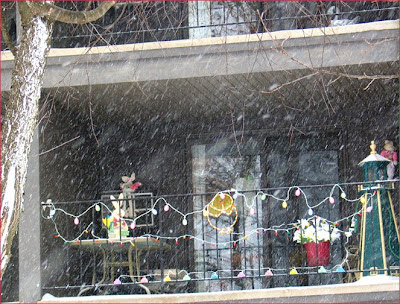 Favre retired Satan, what gives?
Getting back to the four pounds of Betsy Ann Easter chocolate, here's what we thought:
Keep sending us free chocolate.
The favs included the Amaretto Truffle Egg, which Vincenzo seemed to swallow whole after wandering in from doing whatever it is teenagers do at that time of night. (Channeling Andy Rooney again. What, he's not dead?) Vince described it as "very smooth." At least I think that's what he said. It sounded more like "Vrrsmove." Maybe he said, "Vixen, move." She was glued to the spot where a micro crumb of candy dropped.
Phil 3 loved the Crunchy Peanut Butter Truffle Egg, giving it an "Oh Yeah. Uh huhm." I was on something like my 13th egg at that point and passed, but found the smooth Peanut Butter Egg too light, and too, uh, smooth.
Bug and Austin here, loved the Milk Chocolate Marshmallow Egg, which recieved a 5 out of 5 from Bug and a 4 from Austin. Bug also gave the Sitting Bunny the highest rating. 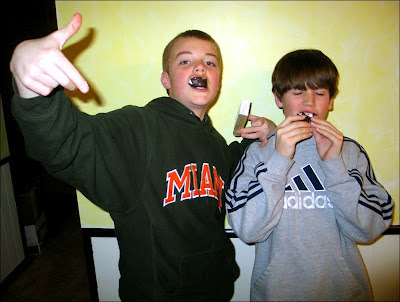 Phil gave the Jamaican Rum Truffle a cautionary "Wow. It's just like taking a sip of rum."
He thought the Pecan Meltaway Egg was a bit sweet, wuss, but we both ranked it quite high. It was one of my favorite eggs.
The Cookies & Cream which got me a "Where are you putting it?" because I was making everybody sick with my capacity for sugar consumption, was a 4 out of 5. I found the Fudge Nut as tempting as the Pecan Meltaway. The Fudge Nut rivaled a fresh slab of Dells fudge, but Neither Phil nor Bug agreed. What do they know.
I was the only one still eating candy when I raved about the Double Milk Chocolate Truffle. Before I make all of you ill—too late?—I must mention the Milk Chocolate Butter Cream, which I gave a 4.75. Phil gave it a 1.5 out of 5. Double wuss.
Had enough? No? The Betsy Ann American Chocolates Easter Collection will be available through April 30.
Dished by Jeanna on Sunday, March 30, 2008 7 comments: 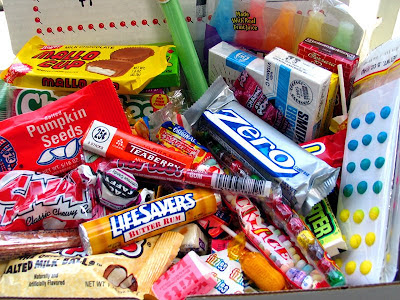 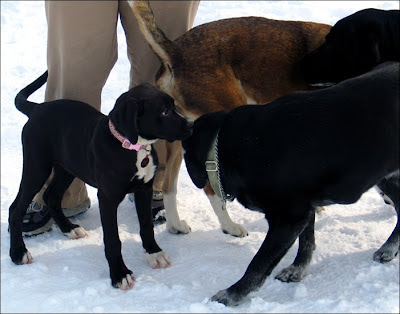 "I don't see the attraction." (Roscoe, as usual, is a little off target.) 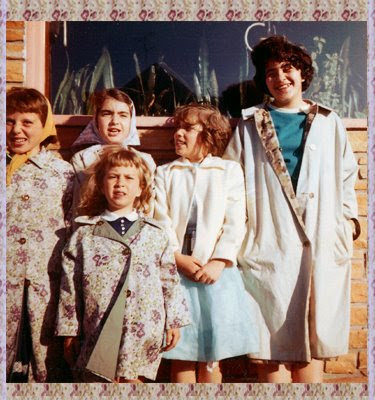 From the Wisconsin Candy Dish. 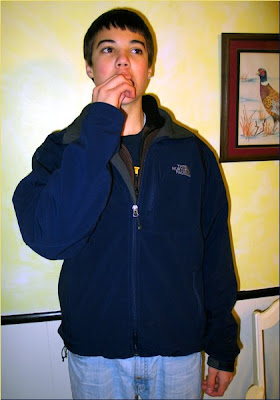 The final vote was cast by one of our taste testers and judges, Vincenzo here, and...
Chrissy is the undisputed winner of the Find The Candy Contest.
All candies, with Vince's help, will be named this week. Chrissy will be receiving a lovely package of goodies in the very near future.
Shoot me an email, C.
Dished by Jeanna on Sunday, March 23, 2008 11 comments: 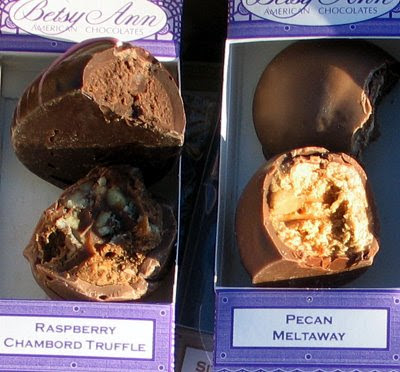 (Practically) Wordless Wednesday
As in I lost it when I got this four pound box of chocolates from Betsy Ann's and took a bite out of...let's just say many of them.
It was only the light of day which stopped me. Temporarily.
Yeah, the diet's going well.
Dished by Jeanna on Wednesday, March 19, 2008 6 comments:

In The Dish: Betsy Ann's Eggs 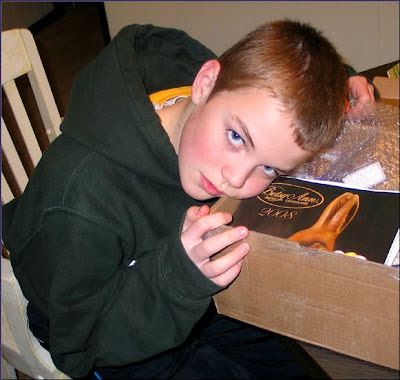 The Betsy Ann post is on the table—not a particularly safe place for a box of gourmet chocolates—and coming to a blog near you. Bug here pretended to play it cool, but was caught bonding with the four pounds of chocolate. Which he then helped devour. 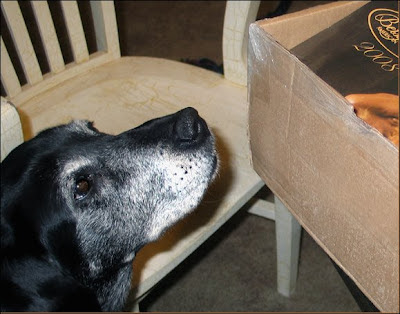 It's just you and me now, bunny. 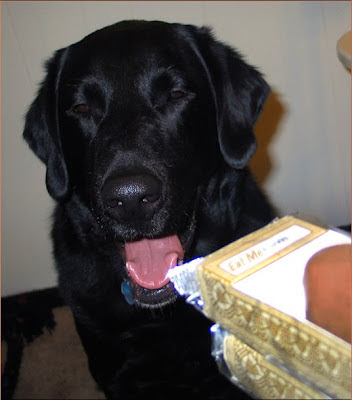 I'm getting that "No chocolate for you" Soup Nazi vibe again.
Not cool dude. Not. Cool. Got a mint? (Practically) Wordless Wednesday
Name at least 30 nostalgic goodies (I count 33) by piecing together the box of nostalgic candy from this photo and the three photos below, and WIN...something. Candy I'd venture.
Dished by Jeanna on Wednesday, March 12, 2008 28 comments: 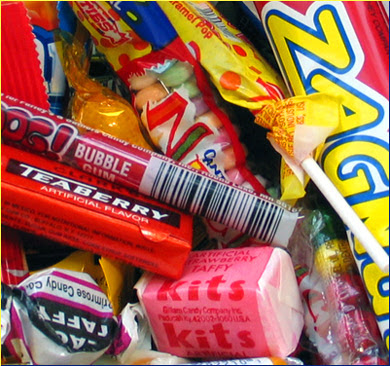 This post was prompted by the amazing Mr. Ripley, I mean the amazing *Lisa, which gives me a chance to let all the chocolate I gluttonized over the weekend settle. Right on my arse. Betsy Ann American Chocolates sent me a case, and I mean A. Case. of gourmet chocolate Easter eggs last week, and although I did my best to resist, I shredded through the top two layers like a rabid dog before it made it to the Test Site. The candy I mean, not the dog. There is no dog. Well not a rabid one (that I know of). Thankfully, there were volunteers waiting.
The Challenge: Memorable Lines From FiveDifferent Movies and to Whom Might You Utter Those Lines if Your Mind Weren't Like a Very Thin Piece of Chocolate Covered Swiss Cheese
All mine involve candy.
1) Strangers With Candy (2005)
Jerri Blank introducing herself to her new high school classmates (Amy Sedaris): Hello, I'm Jerri Blank and - and I'm an alcoholic. I'm also addicted to amphetamines as well as main line narcotics. Some people say I have a sex addiction, but I think all those years of prostitution was just a means to feed my ravenous hunger for heroin. It's kinda like the chicken or the nugget. The point is, I'm addicted to gambling. Thank you.
When might I use that? Anywhere I could. Job interviews, various court room appearances, family picnics (where it would be particularly poignant). 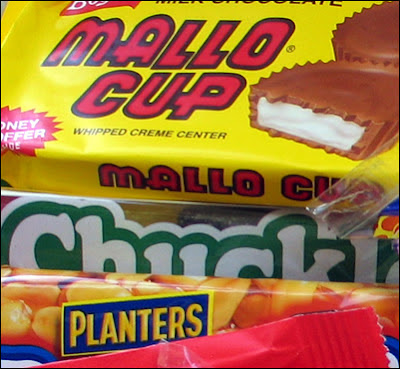 2) The Devil's Rejects ~shudder~ (2005)
Candy (Elizabeth Daily): What you lookin' at?
Otis B. Driftwood (Bill Moseley): I'm lookin' at you, mama.
Candy: Yeah, you see something you like?
Otis B. Driftwood: Maybe. I set my standards pretty low, so I'm never disappointed.
Who'd I say that to? Saving it for bar time.
3) Brain Candy (1996)
White Trash Woman (Mark McKinney): How can you sleep with my best friend, and then tell me about it?
White Trash Man (Bruce McCulloch): Sure I told you about it, baby, but don't shoot the messenger!
Who to: There is many a jerk I'd like to reverse roles on. 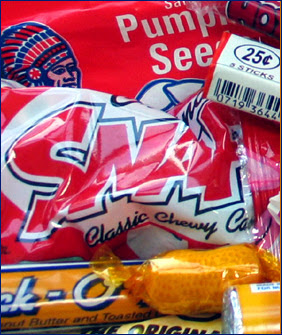 4) Planes, Trains, And Automobiles (1987)
Del (John Candy): You play with your balls a lot.
Neal (Steve Martin): I do NOT play with my balls.
Del: Larry Bird doesn't do as much ball-handling in one night as you do in an hour!
Neal: Are you trying to start a fight?
Del: No. I'm simply stating a fact. That's all. You fidget with your nuts a lot.
Neal: You know what'd make me happy?
Del: Another couple of balls, and an extra set of fingers?
Think I'll use it during March Madness and change Larry Bird to LeBron James or Josh Shipp.
Candy (Based on Voltaire's Candide) (1968)
5) Grindl (Brando): They say in my country that the centipede has a thousand legs but he cannot tap dance.
Candy Christian (Ewa Aulin): I don't quite see the connection.
Grindl: Well, it loses a little something in translation.
You could slip that little gem in the conversation just about anywhere.
FIN
Or Is It?
*Can't forget I.T. Guy for his Technicolor idea (brought to you in breathtaking CinemaScope).
No candy was harmed in the writing of this post. 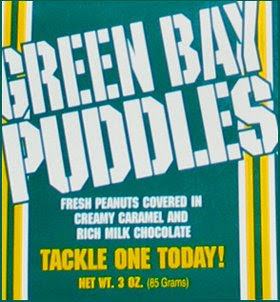 (Practically) Wordless Wednesday
Unless you live under a very large rock in a very deep cave, or on a planet in a galaxy far, far away, you've heard the news that will be rocking Cheeseheads across the land for generations to come:
Mighty Brett has hung up his cleats. I scoured the city for reactions, and because words can simply not convey the pall which has spread o'er the land, here's my first ever (Practically) Wordless Wednesday. 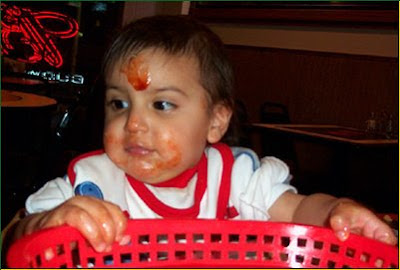 Gabriel Ramon, Packer Fan
"He may have had another season in him, but more importantly, can you fill this up with wings? And some more of that sauce." 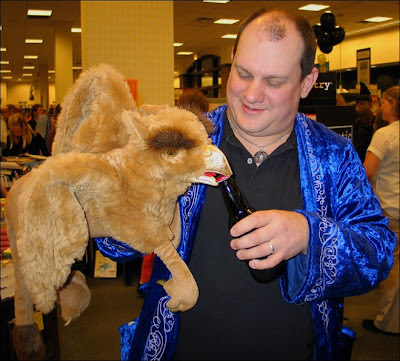 Jebediah Smails, Potter Fan
"I think Gryffindor will take the cup this year." 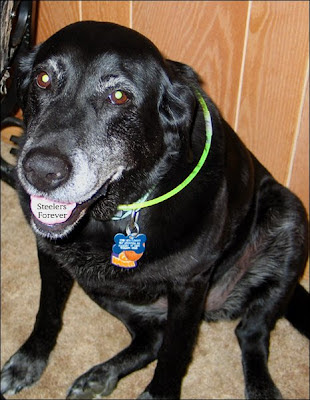 Miss Vickers, Steelers Fan
"You're barking up the wrong end zone. And I'm not into Vicodin." 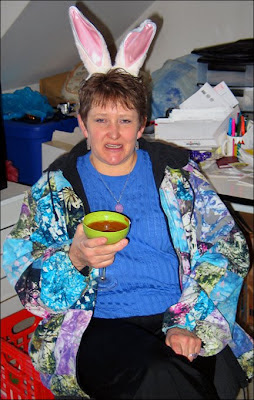 Ms. Nanci Nitro, Cousin and FIB
"I think every Easter should start with a round of Bloody Mary's. Favre? He won't have the Bears to push around anymore. I mean, wait, did I miss St. Pat's?"
Dished by Jeanna on Tuesday, March 04, 2008 14 comments:

There's a lot to be said for movie candy. For one thing, there are a world of sweet and sour candies to choose from, such as Strawberry AirHeads Xtremes Sweetly Sour Rolls. I'm not an AirHeads fan, but you could do worse for a video store point of purchase food.

They have an odd taste, initially, as I find AirHeads do, but that's easily ignored by unrolling the whole thing into your yap. Trying to stop it unraveling is like trying to close a revolving door, so unroll away, son.
The faux fruit rolls are sprinkled with a kind of Pixy Stix dust, as sweet sour candies are. They don't go well with nacho cheese flavored chips—who would have guessed. They did suite The Assassination of Jesse James by the Coward Robert Ford quite nicely, slowly unrolling to the thick center along with the story.
They're not on the Gummi Food Pyramid because of that weird AirHeads aftertaste, but they are worth sneaking into the theater, or having on hand for a post Oscar DVD binge. But be warned, if you eat them too quickly, you can choke on the sweet sour dust and end up sounding like Casey Affleck.
Also Xtreme, people giving up all hope of living in a world without snow, and putting skis on their bikes, like this guy at Elver Park. 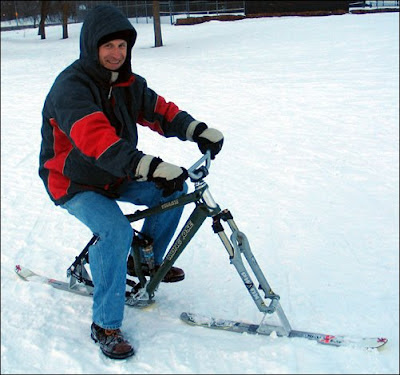