Hot Tamales Cinnamon Flavored Cotton Candy is a great idea that twirls one of my favorite childhood candies into spicy spun sugar. Despite an initial burst of something too strong, it's perfectly sweet and peppery. 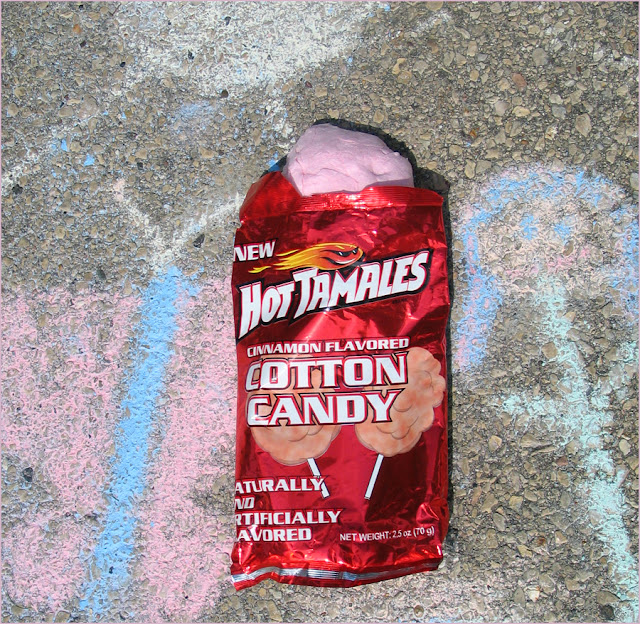 The flavors perk up when the tufts melt in your mouth and turn into a melty crunch. I love how the familiar cinnamon sting follows the sugar residue.

The pink clouds of  spiced cinnamon are addictive with 37 sugars in half a bag if you're counting.  It's a pretty close Hot Tamales approximation and should please the red hot, red dollar, and atomic fire ball crowd.

Bonus: My almost twenty something cousin and Dish taste tester said "i wish I could like this multiple times" when I posted the photo on Facebook. 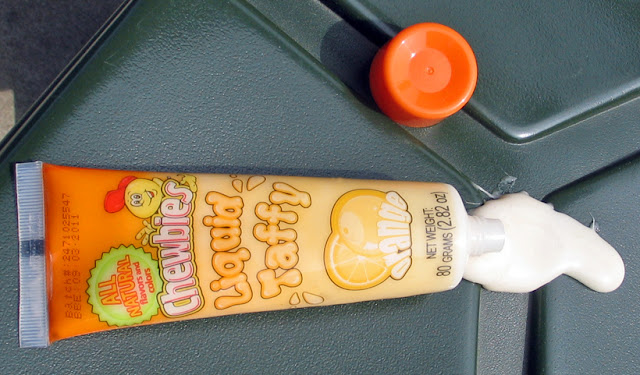 If you like eating toothpaste or snuck baby aspirin as a kid, you probably still  won't like liquid Chewbies. The tube of orange glop may be a fun looking liquid sugar delivery system, but it puts the "desp" in desperate, the" err" in emerrgency candy.

Maybe it's a popular playground food, if you're pivy to this information please let me know. And speaking of privy...never mind. The only thing extreme about this Extreme Creations taffy  is that it would make an extremely sticky super adhesive.

It's more tacky than taffy, and hard to dispense without creating an insect frenzied mess. You wouldn't believe the state of the photo site, especially after I tried cleaning up with paper towels.
Dished by Jeanna on Monday, June 20, 2011 2 comments: 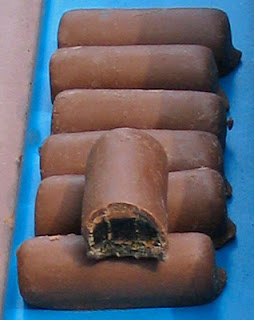 That's right, chocolate coated black licorice. Before you say "blech" and switch channels, it's not what I expected and might not be what you think. Or maybe it is.

I grabbed these Walgreens Candy Classics in an adventurously munched out moment without knowing the esteemed Kookaburra makes a similar product.

One cautious bite into a juicy piece of chocolate revealed soft Aussie black licorice smothered in thick milk chocolate. The smell of the bag was deceiving, wafting solely of cocoa, and the smooth  chocolate made a happy match for the bite of black licorice. The two distinct tastes complimented each other in texture and flavor. There's a soft crunch to the milk chocolate and the anise flavor lingers on your tongue.

Walgreen's Candy Classic Milk Choc Coated Licorice Bites, are more than bite-sized and more than the concoction of a munchies craving gone wrong. Intense and mild, sharp and smooth, soft black licorice and milk chocolate coating were an unexpected nosh.
Dished by Jeanna on Friday, June 17, 2011 No comments: 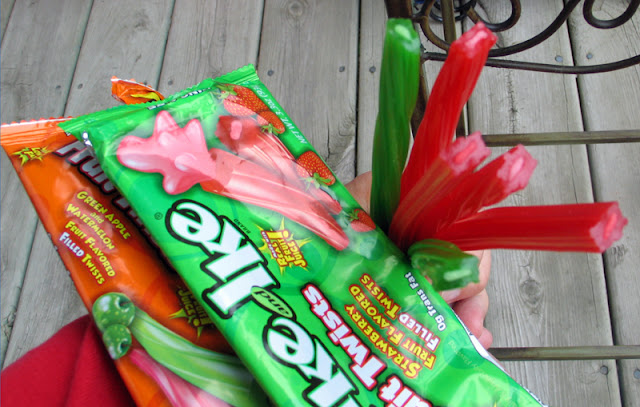 Mike and Ikes are one of those brands that scream "don't mess with a good thing" yet last I checked there were nine flavors. The really good thing in my sugar coated book is the imitable grape Jolly Joes so I don't really care what they do with strawberry or green apple.

Neither filled twists are in the same league as the Original Fruits or the mouth watering grape Joes, but they do what we've all been thinking or trying to do on our own, combine sour powder and sweet licorice. I enjoyed the crunch of the sugar filling. Although these try to mimic the classic Mike and Ike taste, the twists are more tart while maintaining the sweetness of the crunchy jelly capsule.

The Strawberry Filled Twists have an almost overwhelming smell and are so slick and slippery I couldn't clamp down when I tried to nosh and type. This could be an any berry flavor although they seemed oddly thicker and more rectangular than the other two. Is it just me? Probably.

Green Apple and Watermelon are paired together in a King Size 3.3 oz bag with the Green Apple having a weird, oily after taste and the Watermelon twist having the same with the most artificial taste of the three. Because green apple Jolly Ranchers set the standard for this flavor, the green apple Twists were comparatively sub par.

You can't suck the filling out or hold on to it too well, so munch down on a solid idea with a shaky aftertaste.
Dished by Jeanna on Monday, June 13, 2011 No comments: 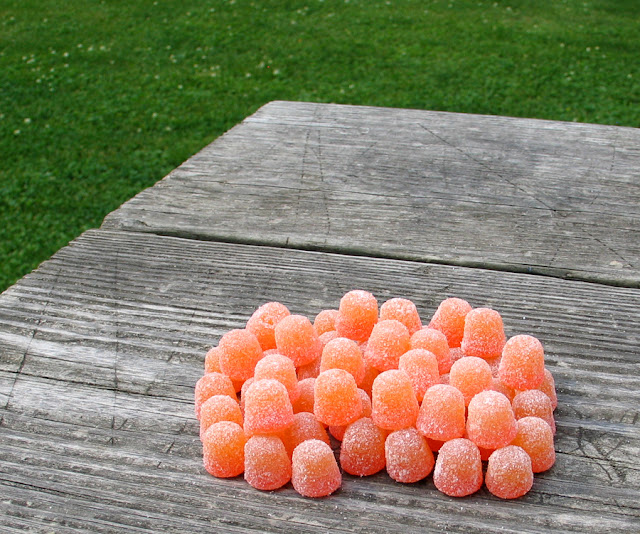 At some point I started putting Dots in my movie popcorn instead of Jujyfruits. I was no longer a child but had no intention of putting away childish things. Along with my cousin, I'd chuck green Jujyfruits at the screen when the movie got as bad as the gag inducing mint flavor. Yes, back then they were mint. Horrid little things. I mean the green Jujyfruits, not us, but either way.
The rest of the box was great, one of my favorite candies to this day, but at some point during the movie frenzied 70s and 80s we decided to broaden our movie candy horizons and try Dots. Not an ugly mint drop in the box.
According to the Tootsie website, Dots flavors hadn't changed from 1945 to 2003 when Tropical Dots were introduced. I remember having fun with Dots Elements in 2008, although I only found three of the flavors and have yet to taste Earth. Tasting Earth, that would make a great name for a band. I'm pretty sure I saw them at Shopko recently, will take a look.
Everyone loved the Yogurt Dots we tried at a La Crosse game that same year and both brands took a lovely photo.
This will be my first taste of actual candy in almost three weeks, so be gentle.
The first bite of Dots Sour Peach Slices was sour indeed, and immediately followed by an infusion of peach that reminded me of fruit pie. The sour sugar coating stayed on my lips and made me want more.
The second bite wasn't as good as the first, with a little artificial flavor coming through and the last taste on your tongue and lips a bit too sour. Since I'm only allowing myself the one Dot, my impression might be different if I ate more, but I suspect the Sour Slices are too sour and only become more so the deeper you dig.
Nice try, good fruit flavor choice, but I'd like to see a nice juicy peach Dot without the sour coating. They also come in Watermelon and Grapefruit, but I don't know why either would taste better.
Dished by Jeanna on Thursday, June 09, 2011 7 comments:

At The Lake Mills Farmers Market

There's nothing quite like a Farmers' Market to make you want to fill your plate with fresh vegetables. 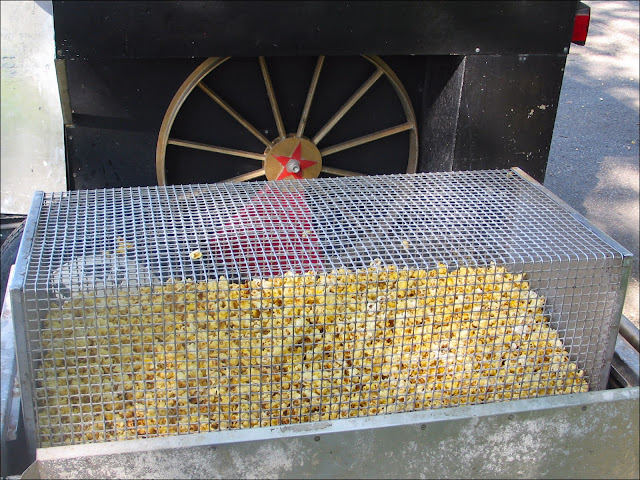 Kettle corn is a vegetable, right?
I wanted to go for a bike ride and was feeling feisty enough to deal with the miserable geese who chase and snap at bikers on the Glacial Drumlin Trail (though not up for the rash of bike muggings around town).
After navigating around trucks and pipe—both the bike trail in Lake Mills and the South Stacks at Memorial Library are under construction along with pretty much the entire city of Madison—I happened upon the Lake Mills Farmer's Market in one of the most charming parks in the state. 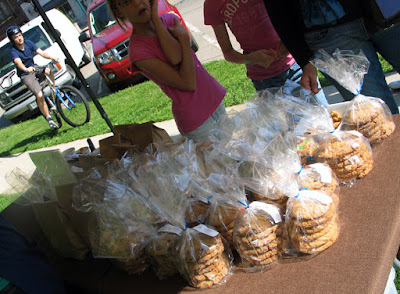 This place is gorgeous and small town without that creepy Stephen King overtone. Although I'm not so sure about the guy on the bike (follow the white hand and finger). He inspired me to start a folder of background dirty looks.
And as much as these homemade cookies and God help me free samples tempted, I did not cave. Maybe it was the guy on the bike judging me. I do know the little girl's mom was making mmm yummy sounds. 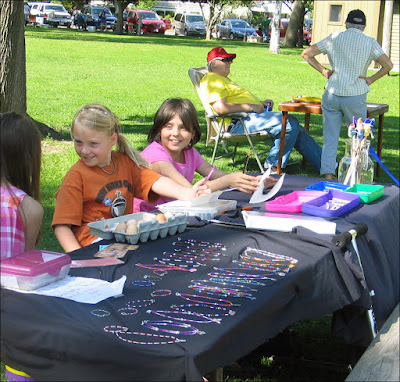 I love this kid's expression though. I'll have to ask about the egg crate of what looks like farm fresh eggs. You know, it's really hard to take photos in the kind of sunlight we had yesterday, but no complaints, a frabjous day!
Right, Tara? Tara the Wheaten Terrier sparked a little bit of debate on the Dish Curtain Facebook page.
Number of Eyes: More than one, less than three. 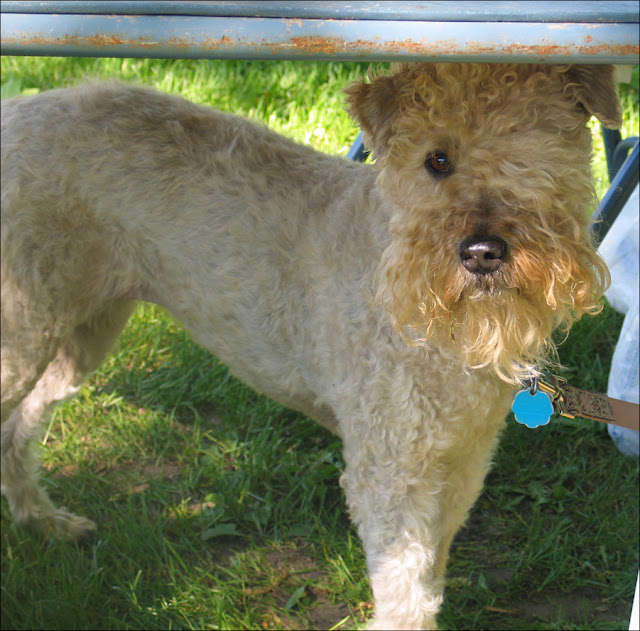 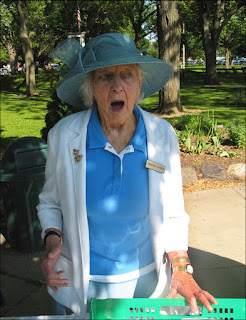 The Lake Mills Farmers' Market goes from May through October every Wednesday from 2 pm to Dusk, although I know Dorothy (left) has been there first thing furnishing pastry to those with an early morning sweet tooth.


To become a vendor stop by on market day and visit the Main Street Tent next to the picnic shelter. Here you can meet the manager and pick up an application. Same day set up is allowed if there is space! Only $5 per day or $75 for the season. You can also see the rules and application online at www.lakemillsfarmersmarket.com.
Dished by Jeanna on Thursday, June 02, 2011 No comments: