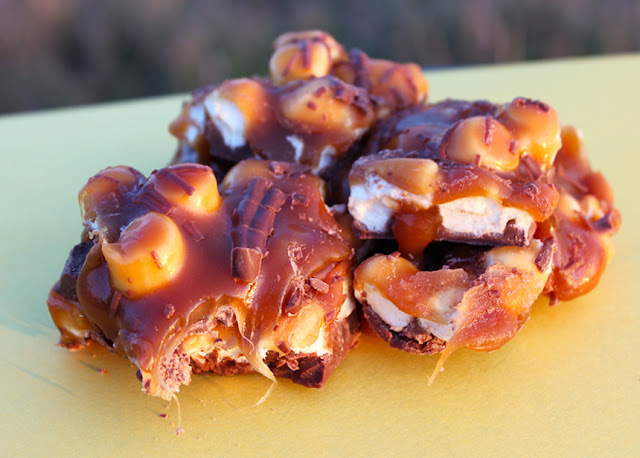 Pleasant View Candy Shop Goo Goo Bars, eight ounces of Amish candy from Soldier's Grove by way of The Shoe Box,  is one of those chewy, gooey, mawkish messes that gets inside your head until you take it in your jaws like a werewolf tearing through flesh even though you had no intention of ever touching it because it was for your parents who treat Amish candy like Kosher wine at seder.

The Amish Goo Goo Bar is built with piles of mini marshmallows, junk chocolate, and globs of caramel. I believe the slab capable of moving across the desktop and running amuck. I fully expect it to pop out of my stomach Alien-style later.

A quick whiff could put ten pounds on your arse and send the plastic container into reactive hypoglycemia. Okay, I'm done now.

I thought it was turtle candy at first, then thought it something you have to shove in your mouth without thought or warning damn the consequences. It's the thick caramel seductively sliding off the marshmallows that get you.

This brick needs nuts or a cookie to counter the onslaught of sugar. Less than half—which is still a lot—makes you want low sodium soup, or multi grain bread, or spinach or grass or grits or something.

I do like how the caramel lingers, but the last thing this hunk of calories needs is a foundation of lousy chocolate. If ever a dessert screamed for crunch and salt, it's the Pleasant View Candy Shop Goo Goo Bar.

It was surprisingly less than appalling with diet Mtn Dew.
Dished by Jeanna on Friday, October 28, 2011 No comments: 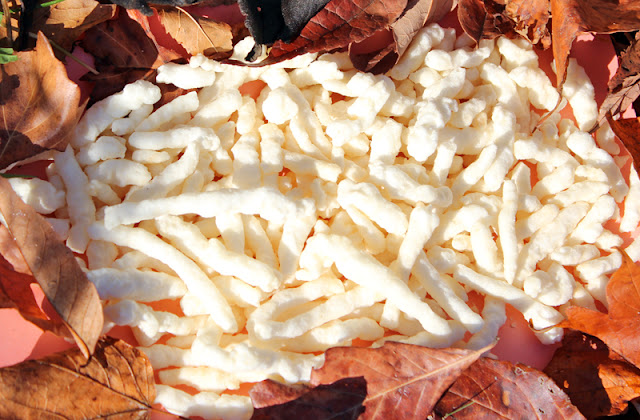 In other words, these Skeleton Bones are crunchy Cheetos with white cheddar. Although none of the skeleton bones are detailed to look like either skeletons or bones, the color is a sickly white and would look good in a ghoulish serving dish.

The white cheddar adds a lighter and less savory twist which gives you more crunch than flavor, making them seem stale.

Yet there's a consistency to the airiness of the corn snacks, making me wonder if they're supposed to be heavier on crunch than taste. There should be more complexity to the lackluster cheese flavor, but  since the bones are a one-time holiday snack, it might not really matter. They're more addictive than they should be and could be fun at parties. 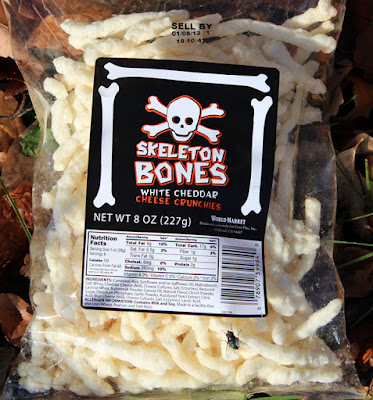 They're also short on crumbs and don't stain your fingers. I'm not sure if the packaging is simple or bold, but I'd want to leave the package around or label the dish to let people know they're skeleton bones, not stale white Cheetos.

World Market's Skeleton Bones aren't the worst thing I've washed down with beer, but much of their charm depends upon knowing they're skeletal remains. Okay for the season, I'd look elsewhere to satisfy my corn curl Jones.
Dished by Jeanna on Tuesday, October 25, 2011 2 comments:

Twix A Box and a Hard Place

An enthusiastic I'm assuming young man named Brad sent me a grocery store sized box of crunchy caramel-dripping candy bars on behalf of Twix. I ate one and felt the need to drive around town until the other 35 were gone and out of reach. I didn't have to drive far.

I hilariously attacked the box after a manicure when I'd gotten enough open with a dull scissors to see what was inside. I then turned into a far less co-ordinated version of Edward Scissorhands, snipping at every possible angle while holding my nails aloft. Long story short, manicure ruined, Twix consumed in inhuman manner in a parking lot while two women watched from a car in what was either shock or admiration.

That hit of sugar sent me straight to a computer to rave about the first candy bar I've had in I don't know how long. The devilish milk chocolate draped over the crunchiest bit of heaven to hold up a pillow of caramel—my cell phone vibrates—it's my dad, he locked his keys in his car. He gives me only a name of a road and hangs up. This particular road is long enough to connect to another town. 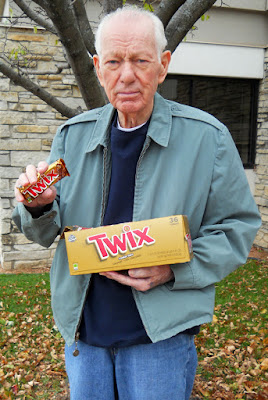 When I called back, he to be told that he was on a hill, then, by a bank (which bank and for that matter what kind of bank, the place where I have no money or an upward slope? ).  After circling the parking lot of a savings and loan he used in the seventies, I found him strolling out the front door, cup of coffee in hand. He had no problem posing for the photo as all Dempsey-Olsons are trained to do at birth. 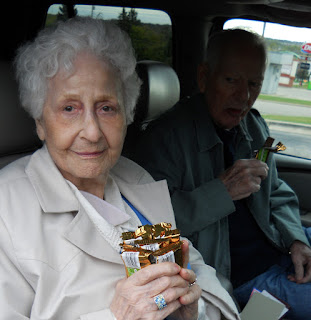 My mother, being a Farino, came out when she heard the words "candy bar" and grabbed a handful for the "girls at the dentist's office." I didn't ask, but questioned the sedition of bringing two handfuls of candy bars into a dentist's office. Yet I knew that's what she was going to do, those candy bars right there. Love the expression on my dad's face. 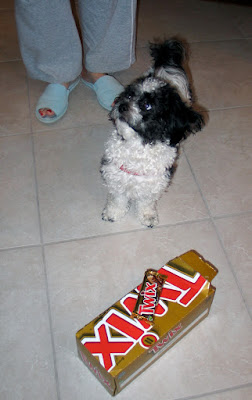 As long as I was in the old neighborhood I thought of of Jackie and Bob.
Since I haven't given one of our best taste testers (in the blue slippers) much to do since last summer I decided to drop by her kitchen, which smelled of garlic, oregano, and the caliber of artichoke you'd crawl over your starving sister to eat with your bare hands. I got rid of another handful in the Clementi kitchen, but after I left I realized some pretty serious sweet tooths—teeth?—would be up for a birthday party, I should have left more. The party is for my Uncle Phil, whose real age no one seems to know. I'm going with 100. Ish. 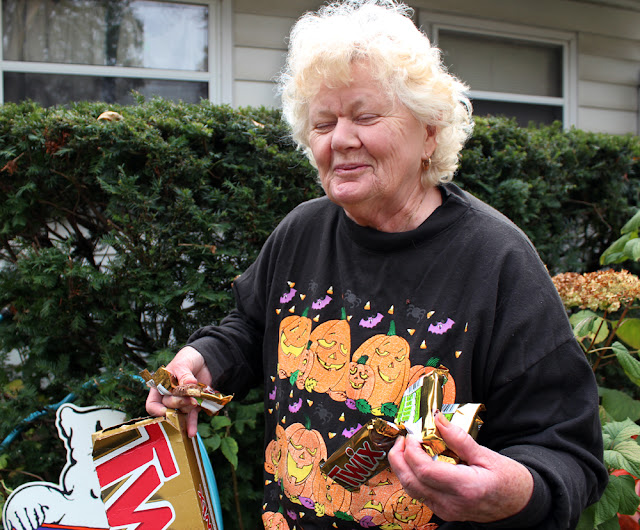 Off to Aunt Em's who called to say she had the perfect birthday card for Uncle Phil. Read it, it really is. And the inside says "To hell with the cake...Bring on the girls!" which, if you know Uncle Phil, and chances are you do, is spot on.

I finally returned to the computer which was doing something spastic when I got back, and am glad to say there's nothing left to tempt me but a lone Twix wrapper (which I'll lick in private later).

Taken with three different cameras, two of them emergency point and shoots.
Dished by Jeanna on Thursday, October 20, 2011 2 comments: 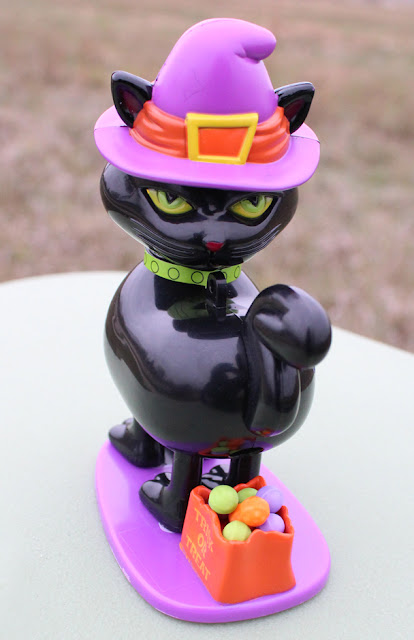 This Poopin' black cat candy dispenser is a hateful thing that yowls, howls, and meowls at every bump or whenever I throw it across the room. It sat in the back of the car and my bag long enough for its mrrow mrroww mahhrrr mrrow mrroww mahhrrr to work its way into my skull like an ice pick.

Another Galerie product (which has come to mean colorful candy with fruity overtones), the cat looks utterly stoned. They're calling the SweeTarty Smarties type litter "Candy Balls." The balls are the size they had in every princess wand and dime store toy before choking hazard was common parlance, so beware. It's for ages 3 and up, but I don't like the size of those balls.

The kitty litter balls are lively lovely shades of Halloween green, violet, and orange. They're tasty and give way between your teeth without a fight, which is good because they aren't for savoring or sucking.

The pooping mechanism never worked, but it was fun to rip the thing's head off and put the candy in the litter box/Trick Or Treat bag. It does beg the question, "What's up with all the pooping candy dispensers?"

Despite could do with out this one, or any one of the endless line of evacuating plastic characters, although I'm considering some poopin' turkeys to spice up the table this Thanksgiving. 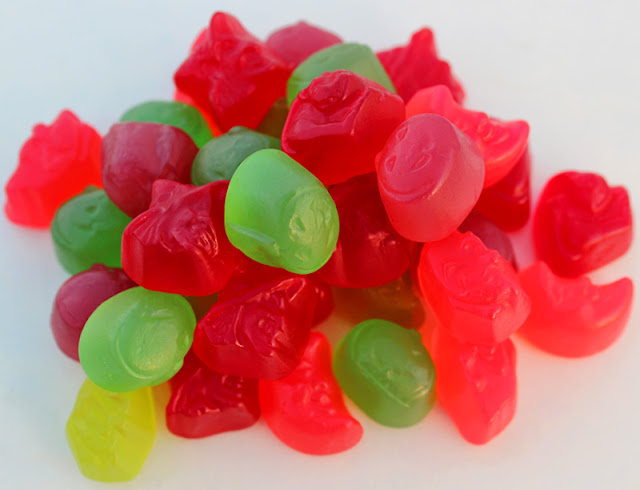 Lifesavers Spooky Shapes Gummies are more box than candy. And this box has unnecessarily sharp corners which is fitting for Halloween but not great for someone whose neuroses spike around the holidays. The graphic looks good against a spooky booger green, but you have to pull out the silver pouch to get to the candy and there's no easy way to leave it in the box while snacking. I did like how the slanted end fastened tightly when at rest.

Getting to the Candy
The gummy shapes aren't easy to distinguish and I had to guess the flavors before tracking them down. A few were better than I remembered Gummies 5 Flavors being, and the rest are the reason I don't like them. 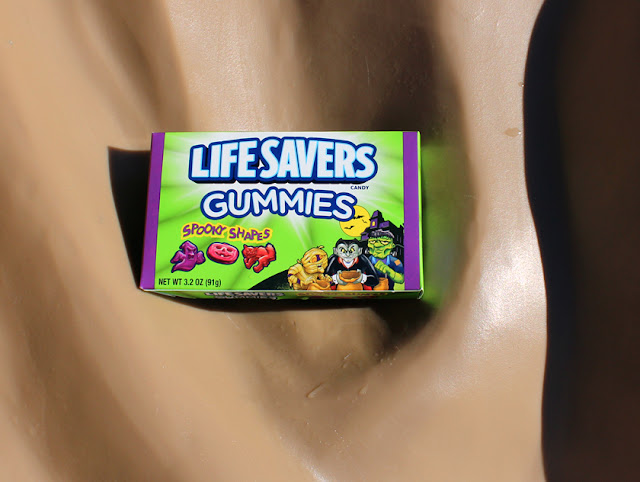 My favorite Lifesavers delivery system is the classic roll and unless they come up with a kickass sucker or a better candy cane, I don't see that changing. And as much as I appreciate the pineapple and orange from the updated (2003) 5 Flavor roll, I don't think you can beat Wild Cherry or Butter Rum. So I'm a traditionalist and despite knowing you need to make new products to make new money, don't see the sense in forcing a classic hard candy into a gummy. 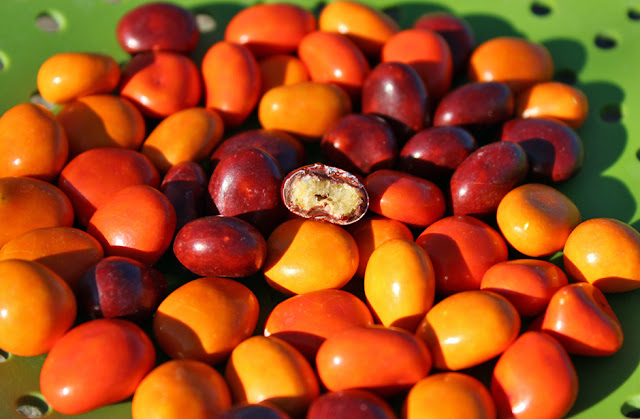 Corn Nuggets, yes I see it now. Cornholio jokes aside, Kimmie Candy Company's chocolaty Kettle Corn Nuggets are the unholy offspring of kettle corn and an M&M kind of coating. Then there's a Sugar Pops aftertaste to put an accent on the hearty corn snap.

There's a strong corn nut flavor running through each well proportioned piece. Their website has two more flavors, multicolored and—eek—Habanero. The Sweet & Hot Habanero are all red nuggets, more for the Flamin' Hot Cheetos crowd. The spicy cinnamon wasn't unbearably hot, but I thought it at odds with the sweet crunch and chocolate. I preferred the Autumn mix which let you taste the candy without the distracting heat.

First you taste the hard candy shell, the light chocolate, then an almost honeycomb crush followed by corn pieces which linger on the tongue. The candy is attractively colored and packaged in a rectangular tube which is easy to open and keeps the candy in one place, most likely your mouth.

There's a slight stale taste compensated by passable chocolate and sugary corn. Autumn Kettle Corn Nuggets are something different and fun to eat with a click-tight container you can work with one hand.
Dished by Jeanna on Monday, October 03, 2011 No comments: