The weeks leading up to Easter can be unseasonably warm or smack you upside the head with the kind of cold it's hard to ignore and not for lack of trying.
Some of us jump the gun after a few nice days in February and pack away our winter things making us think twice about leaving the car within blocks of a lake—and some of us are always within blocks of a lake. This city is really an island that gave up and opened a few falafel stands.

so I came down with what my father calls "the crud" for lack of a better and more off putting word. This particular crud was due in no small part to two flat tires in a day that ended up a lot colder and more populated with frozen puddles than it started.
I spent a good deal of it waiting around for the insurance company's roadside assistance (i.e. college kid in beater with tools) because I didn't renew my AAA and the portion of the Beltline you'd take to get to me was shut down due to flying ice. I was taking old people to UW Health between trips to Firestone Tires and it turned into the scene in Goodfellas where the doctor wanted to admit Ray Liotta even though he was there to pick up his brother.

I had the kind of day which makes the underrated Scorsese classic After Hours look like a spa weekend with free booze and Oompa Loompas. All this two days after I went a little nuts and turned a 6 oz Reese's Peanut Butter Egg into hot chocolate.
When my fever got down to a level less than that of an exploding cartoon thermometer I found these photos in the camera and it all came back to me. 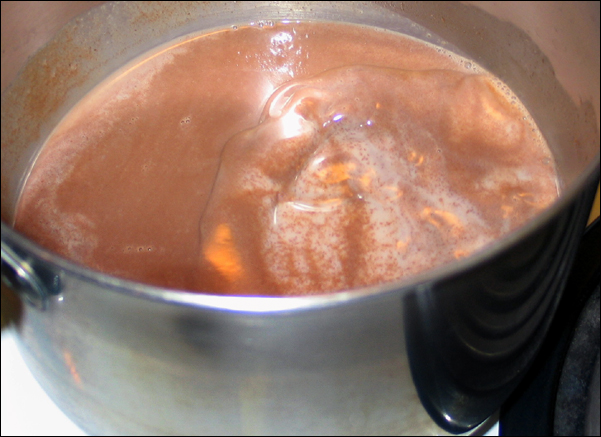 I like peanut butter. I like it on an apple, a spoon, or hilariously placed on a dog's nose. I've eaten peanut butter kisses long past decency. I know Reese's Peanut Butter Cup fanatics. A healthy dollop of peanut butter all but bursts through a teasing top layer of chocolate surrounded by accordion shaped Hershey's milk chocolate in a 1.5 oz cup.
The thickness and shape of the chocolate do matter.
This beast was so overpowering on both the pedestrian Hershey's chocolate and peanut butter fluff front that my only choice was to scrape out some of the peanut butter, break the egg (not so easy), and toss the whole thing into a pan with milk.
And it was delicious. Make it like any other candy bar hot chocolate. Here's a video that uses Dove, it's similar to that.
So no to the ponderous and insanely difficult to break 6 oz peanut butter egg and yes to the sweet, smooth, and slightly salty Reese's Peanut Butter Egg Hot Chocolate.
Dished by Jeanna on Monday, March 07, 2011