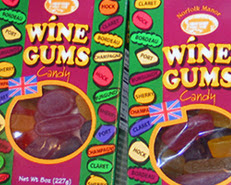 I found these gummies teetering between the PMS mints and the gummy bandages, not too far from the Hot Flash mints and Vertigo cookies.
Quelle surprise, there's a whole wine gum culture out there. Maynards and Pascall—what doesn't Cadbury Schweppes own—seem to be what people crave most.
Here's an interesting tidbit from the English Tea Store:
"Maynard's Wine Gums are no longer permitted to be imported into the USA because of the food colorings used in the candy. Norfolk Manor Wine Gums are made in the UK according to US specifications on food colorings."
First they steal Madonna (ta), then they Dixie Chick the Dixie Chicks, and now, tainted wine gums. What next, trick us into pretending we like soccer? We have a what now? 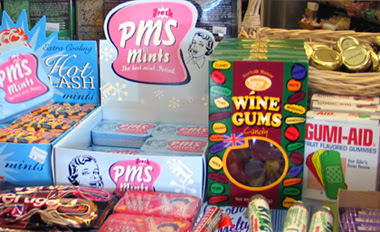 So, Posh Becks, Pop Specs, flop sweat, we came across a few boxes of Norfolk Manor Wine Gums at Gem City. They're oval shaped wine flavors you can pretend are flasks or bottles. Fun for the kids. I found wine gums good for watching SOAPnet in the wee hours after you've worn out your welcome on the upper end of State Street. A little weird and kind of crusty when you expect chewy, and fruity when they should be chock full of illegal dye goodness, but I liked them. Bit off the ends like Nik-L-Nips and pretended I was drinking cheap chardonnay.
They won't replace Dots or Jujyfruits, but they're warmly addictive and go well with chocolate cheese.
Dished by Candy Jones on Monday, August 20, 2007