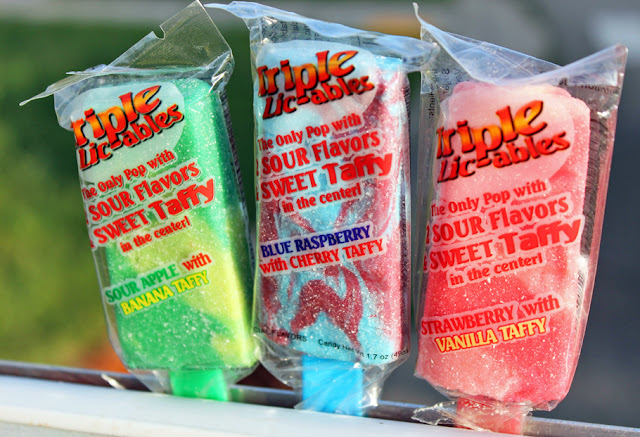 One of my favorite places to get candy is the video store. For one thing, there aren't many video stores left so "huzzah" for interacting with human beings, especially ones who like movies. Secondly, over priced or crazy old, video store candy is always fun. And isn't that what candy is all about, fun? Isn't it?
In the spirit of fun despite the chances you'll forcibly pull out something you'd rather keep fixed in your mouth, I give you Triple Lic-ables.

The three flavors taste much the same after you work through the sour coating, but let's start with my favorite, Blue Raspberry with Cherry Taffy.
Blue Raspberry anything is usually not for me, so this was a nice surprise. The Blue Raz was a little less overwhelming than the Strawberry with Vanilla, my second favorite, and a scoch more addictive.The taffy seemed to roll off the plastic stick more easily, but it's probably because I was really going to town on it. I'll buy that the taffy was cherry. 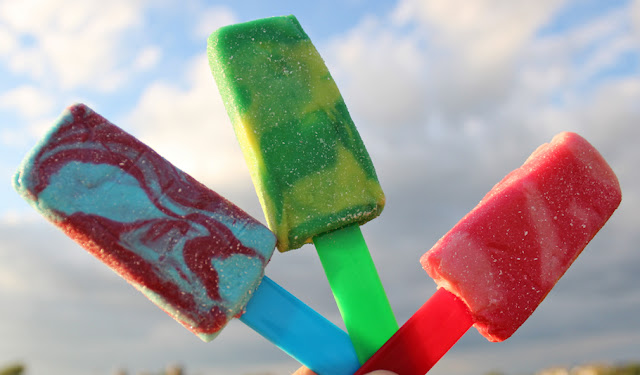 Strawberry with Vanilla Taffy
The Strawberry could be cherry or possibly raspberry, and the vanilla taffy could be any flavor hell bent on dislodging fillings from teeth and teeth from mouths. If you decide to invoke a little will power and suck down the Triple Lic-ables, a name I object to, btw, it will sandpaper your cheeks with one of the two sour flavors. I could only taste one sour flavor which also could have been anything, but the coarse coating is only there to be eliminated.

Sour Apple with Banana Taffy
Not surprisingly, my least favorite. With the exception of Tootsie's exceptional Caramel Apple Pops, candy makers can't seem to get this flavor right. I did pick up the taste of banana here, but didn't really want to.

I still don't know how much hard candy there was or if the rough sour coating should remind you of a cat's tongue as much as it did, but the taffy is best when it's been masticated to the point of unraveling from the plastic stick. And by the time I got that far I realized I couldn't stop eating it.