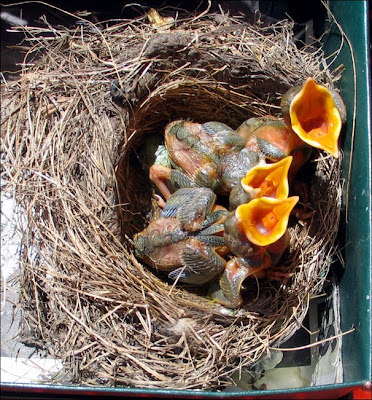 Yes, I know, this is a candy blog (allegedly), but these guys were out in the spot where I take pictures of candy, and speckled malted milk robin's eggs are one of my favorite Easter treats. Did you know that Hershey's introduced Mini Robin Eggs Whoppers in 1952? Yum.
Maybe not so much with the appetite after spending a few days trying to keep these evil, I mean adorable little creatures alive. I can't eat chicken anymore. At least I don't enjoy it.
Things I Learned This Week:

Mushed up worms from a cocktail straw make a fine hors d'œuvre for an insectivore. Remember, feed them stuff they'd normally eat. Like worms. Yum. 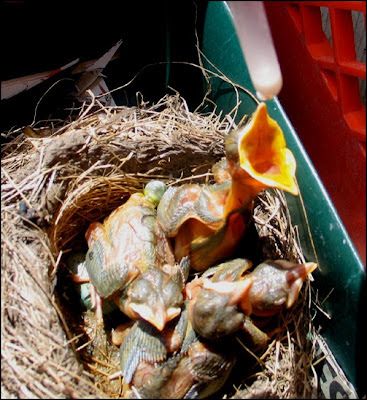 You do not have to jump off your apartment balcony to teach a bird to fly (thanks for that, Phil.) (photo not available) They'll do it on their own. Actually, funny story, I once had to stop my nephew, Joey, from jumping off my apartment balcony.

If you see their cold, seemingly lifeless bodies on your porch after a storm and the mother won't come around and you flash back to the first time you read Helter Skelter, you should indeed pick them up and put them back in their nest. That's a myth about how if you touch them the mother won't come back. It's like how guys with steady girlfriends are better in bed. Or if you touch them their girlfriends won't come back. Maybe it's their mothers. At least in my case. I can't remember.

And the part about having to chew and regurgitate food (again, thanks, Phil) (photo not available), not true. I think these guys would have eaten a New York strip with A-1 sauce and a side of slaw. Don't try that. Robins are sturdy and the mother was feeding them wriggly beasts the size of sandworms before the storm broke up their happy home.

Keep them warm, but not extra crispy. A heating pad on the bottom of a box (just on half so they can move over if it's too warm) will work if you don't have a lamp on top (same deal, half in case it's too warm). A nice, wide one, like a desk lamp or one of those photo lamps with a 40 watt bulb is the ticket.

Keep things quiet, they're not little drama queens.
"Cheep."
"Don't think for a minute I didn't hear that, Bryce—is that what you're wearing?"

The best thing you can do for them in most cases: Keep calling until you find a place that will take them and do so ASAP because: 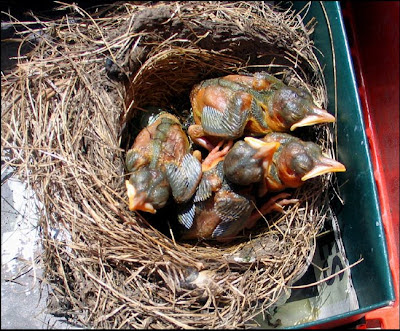 Hideous creatures that they are, they deserve a chance.

People are chock full of misinformation, but there's someone out there who knows.

Don't talk about bringing them in the house, because that would be illegal.

If the bird is learning to fly, aka, a fledgling, don't spaz out if it's fallen from its nest, the parents are nearby and waiting for you to leave. So go!

You can make a nest out of Tupperware if you can't find the original one, and always use as much of the nest as you can. Add some twigs if it needs it. A little tissue if you must. Put holes in the bottom and stick the nest or Tupperware as close to where it fell as possible—away from predators. Then wait and watch.

Hatchlings may not appreciate the worm moat you made for them.

Don't freak out when the godsend that is the Four Lakes Wildlife Center sticks them in a microwave, that thare is an incubator, son.
We have an emergency animal clinic that takes in wounded wild critters 24/7 free of charge. The birds usually end up with the good folks at Four Lakes. There's probably a wild life rescue in your area.

Don't be afraid to call back to double check numbers, hours, and extensions.
Good luck guys, I'll be eating a little less KFC thanks to you.
Dished by Jeanna on Thursday, May 29, 2008