Then there was the eating of the ice cream. We grabbed two premium vanillas from the Kwick-E-Mart, and cracked them open.
It was hard to get past the luscious layer of chocolate ganache on our first pint (no babies drank beer during the filming of this video), and it was the Dove ice cream that was the talk of the table. 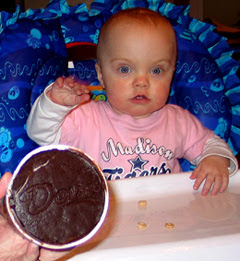 After cleaning up the mess I made tunneling past the barrier du ganache, we (by we I mean Pam) heated up the Sanders Milk Chocolate Hot Fudge topping, and poured it on.
It got an "ummm," an "okay," and a "I wouldn't buy it." Pam and Nanci found it, in turn, too sugary, and too heavy on the caramel, wanting more chocolate fudge. I thought it was alright, but would probably grab a jar of Smuckers instead. Pam is standing by Mrs. Richardson's.
Once again, my parents snarfed up the leftovers, loving every drop. My mother said it reminded her of the corner drug store of her childhood.
Post Script: The Sanders Cinnamon Pear Caramel was the hands down winner of all the Sanders products, and immediately got yoinked from the table and sent to a dorm room in Milwaukee. The Dish regretfully moved on to other sweets before posting that video.