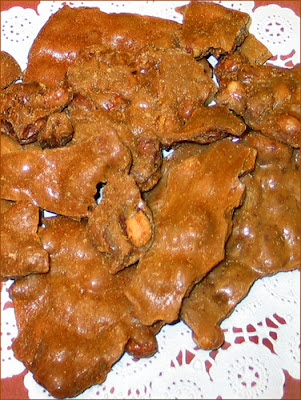 I came across this peanut brittle while looking for chocolate beer and Monroe's Lazy Mutt at Brennan's.
"Monroe, what was from the Monroe Brewing Company," I kept asking myself. No, not the frolicking Fat Squirrel or meandering Spotted Cow. The New Glarus Brewing Company is of course in New Glarus, the town that banned The Pints—ironic, no?
Lazy Mutt is made in the town that brought us Huber, as in: *"I'm drinking Huber because I'm out on Huber Law."
Perhaps more famously known as the Joseph Huber Brewing Company (among others), the brewery is now the Minhas Craft Bewery. No more Joseph Huber, but some young Kanook with a degree in petroleum engineering (eh?) named Ravinder Minhas is the new Monroe Brew King.
The point of all this: Fiery Beer Brittle, although made in Napa Valley, beer capital of the world, is made with Brennan's Cellars Amber Beer. The packaging looks like an inviting bottle of wine, but if you close your eyes and try real hard, you can almost taste the beer. Almost. You mostly taste chili de Arbol powder and savory brittle.
I can not stop eating this stuff. First I sampled it with reservation and the idea I'd give it to someone with a palette for spicy snacks. As the days went by, a wayward nibble turned into a small bite, which gate-wayed into way too much.
At first I was trying to wash off the thick dust of chili pepper, even patting the candy dry to get to the sweet, sweet brittle. But after three pieces for breakfast this morning, my dalliance was over.
Initially reminiscent of Guatemalan Insanity Peppers, the Fiery Brittle became more of a Narnian-Arrakis Turkish spice melange. I became hooked.
They tried to make me go to sugar rehab, but I said no, no, no.
*Huber beer was so cheap you could get a case for $3.46, return the bottles for your deposit, $3.46, and buy another case. It wasn't what you'd call "premium" beer. The joke was, it contained so little alcohol that prisoners on work release could drink it and return to jail sober.
Dished by Jeanna on Thursday, January 10, 2008