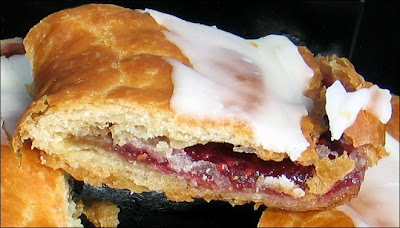 If you ask someone from Wisconsin where to get good kringle, they'll tell you,"Racine."
My mother will tell you that Lane's Bakery from the old neighborhood has the best Racine kringle (you actually say Racinekringle as if it's one word).
I'll bet you canoli to kringle there's some kind of *cheese-on-pie law requiring every bakery in Wisconsin to carry it.
What's a Racine kringle? Well look at the photo, this particular specimen of flat, flaky pastry is raspberry filled, but don't you wish you had one right now?
There's also almond (very common), pecan (also very popular), cream cheese, cherry cheese, apple, blueberry, maple walnut (yum to that), turtle, strawberry, apricot, banana creme, cinnamon, pumpkin, and on it goes. 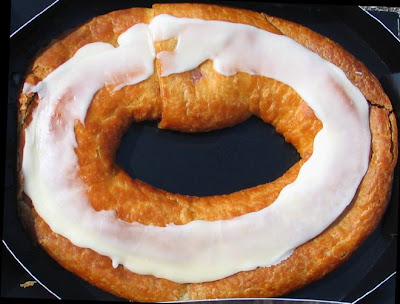 It's not the traditional Danish pretzel shape, looking more like the crunchy Italian bread grandpa Farino used to get from Chicago (we lovingly called it toilet seat bread).
Try a piece. 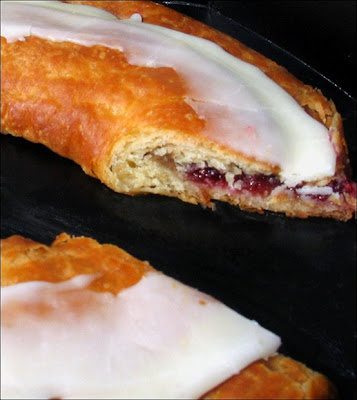 And lookey here, the O&H Danish Bakery (in Racine) is having a Win a Kringle contest.
Racine (rah seen´ or ray´ seen if you're making fun of someone from Shee´ boygan) is located somewhere between That 70s Show and Chicago. It's always been my understanding that the place is full of Italians, everyone I've ever met from Racine has been Sicilian, and the city is most famous for its Danish pastry.
The reason I picked up this here kringle was because it's from Olesen's Family Bakery in, wait for it, Racine, Wisconsin. (When we're not calling ourselves "Dempsey" we go by grandpa's less Irish name, Olson.)
I found this thick and generously filled Racinekringle at the Sentry's in Sun Prairie while buying gas that's .07 cheaper. Yes, I know, I'm using gas to drive somewhere to save on gas.
Did you know they have a walk-in cheese cooler there, at the Sentry's not the gas station but wouldn't that be cool, and every time you walk by it automatically opens, hissing, "Buy ssssome cheessse, thissss issss Wissssconssssin, it would be wrong not to."
Buy sssome kringle, do it now, before you're over the hump, it would be wrong not to.
Where to buy
❧Bendtsen's Bakery
❧Larsen's Bakery
❧ O&H Danish Bakery (hinky link, but keep trying)
❧ Olesen's Family Bakery (in stores)
❧Racine Danish Kringles
In the Madison area: Clasen's, Lanes, just about any bakery or grocery store in the state of Wisconsin.
*An urban legend/state law requiring that every piece of pie be served with a slice of cheese
Dished by Jeanna on Wednesday, March 25, 2009