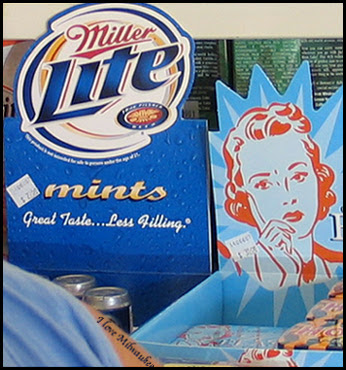 I'm not sure how I missed these, but smack dab next to the Extra Cooling Hot Flash Mints at Gem City were a display of real gems, Miller Lite mints. They must be for "the stupid people." I think my neighbors keep a can in the front seat in case they're pulled over.
Speaking of which, I almost gave my computer to a complete stranger last night whilst running around in a minor blizzard.
What started out as a "can do" attitude gone awry, ended up with me handing off The Beast to who I can only guess was a well intentioned (non-English speaking) stranger. Not an Apple Store Mac Genius as I assumed (I was waiting at the wrong loading dock), but some poor schnook from the food court locked out of Quiznos with an orange handcart.
Cut to Sex and the City voice over:
"Are we too dependent on the computers in our lives? Have we unilaterally become a nation of binary bitches? I learned a lot about myself that night. That braking on ice never works out the way you want. That my high school Spanish continues to fail me. That they don't give illegal aliens keys."
Think I'll have a can of mints and go for a spin.
Dished by Jeanna on Monday, December 03, 2007