I've been rat holing Yogurt DOTS for over a week now, and thought a college Lacrosse game on a so-called April afternoon was as good a place as any to shake them out. 46 degrees my frozen tundra. The wind alone could freeze DOTS to a metal railing. Especially if you licked them first. 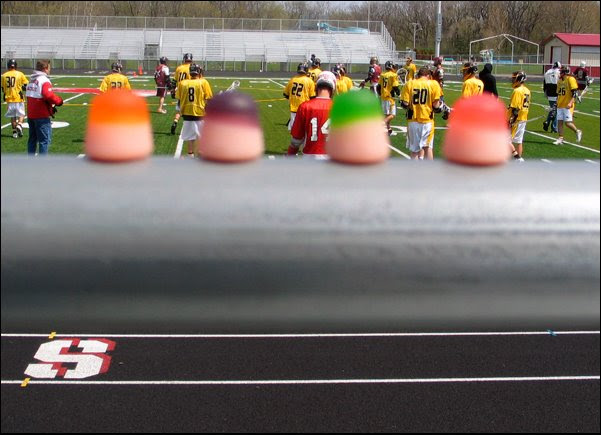 Yogurt DOTS come in Orange, Blackberry, Lemon-Lime, Strawberry, and Banana flavors. The lackluster banana blended in with the orange, so it missed the photo op. Or maybe it got blown out onto the field. Who knows what's going on at a lacrosse game anyway. Certainly not I. It looks like a bunch of guys smacking each other across the knees with sticks. And then the game is over. They're like loan sharks with cute legs. 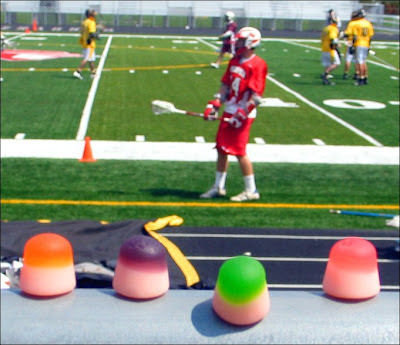 Everyone who tried the Yogurt DOTS liked them. 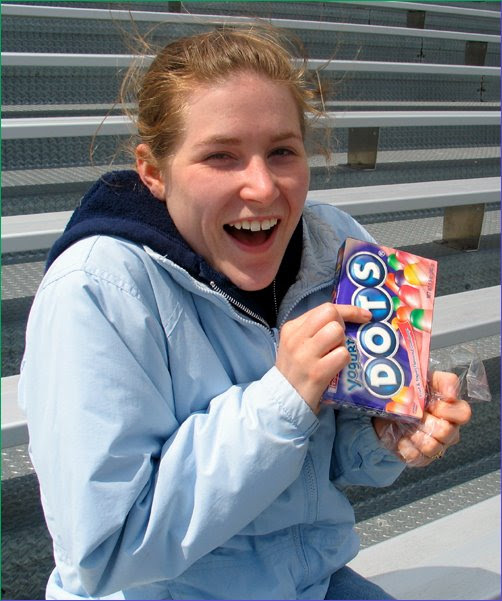 Nitro Nanci and I liked the orange the best. Even though she's holding green. Did I mention how cold it was? 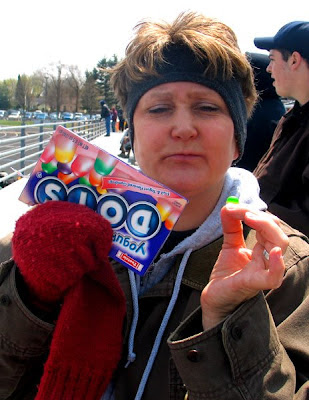 I've been eating them non-stop as I post, first biting off their little heads, then lining them up and finishing off their vanilla "yogurt" bottoms. There's a kind of Hannibal Lecter/Oreo Cookie thing going on and suddenly I crave fava beans sprinkled with Chianti flavored cookies.
I ate them into an overall feeling of self-loathing. But that's okay because it is yogurt after all. Well, no, no it isn't. Not a drop. Not a scosh.
There is, however, a handy DOT DROP on the side and a movie quiz on the back.
Don't eat Vanilla blanks while watching Vanilla blank or you'll upchuck the Vanilla yogurt blanks into your Vanilla colored blank.
Blank, I'm out of DOTS.
Dished by Jeanna on Saturday, April 26, 2008