All Melted and Eaten: Divine Chocolate 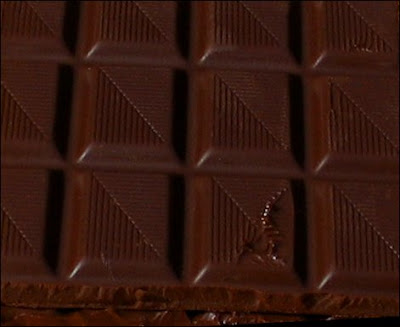 I tried to wait for the other taste testers before I opened the Divine Chocolate package, but it got all melted and eaten.

This sumptuous Fairtrade chocolate attracted every bug and pudgy child in a five mile radius at the splash park where I shot it.
Bang.
The Milk Chocolate Coins were quite tasty, made from the same drool worthy milk chocolate used in the Fairtrade Milk Chocolate Advent Calendar—Advent came early this year. The coins attracted insects even before I opened the foil. Unless it was me, I reeked of the bean. 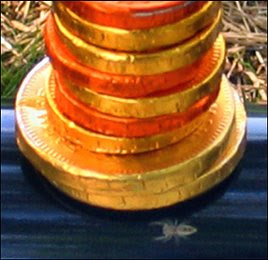 I still have some grubby pieces of dark chocolate nestled in mangled foil on my desk. I keep telling myself it's there as air freshener. That's how strong the smell of the 70% Dark Chocolate is, and it's surprisingly fresh and silky on the tooth after two weeks of abuse.
The Mint Dark Chocolate, 70%, is probably the same as the basic dark with peppermint crisp, but didn't make the same impression as the basic dark bar.
Interestingly enough, the Dark Chocolate has significantly more fiber and less calcium than the lackluster 27% Hazelnut Milk Chocolate. Maybe it's only interesting to me because I don't know much about chocolate. 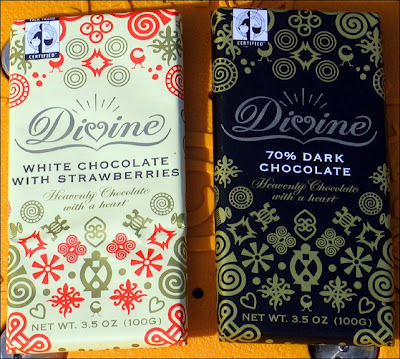 If you want an informed opinion, Cybele is also writing about Divine Chocolate. My knowledge of chocolate is a lot like my knowledge of money: I can't tell you how to make it, but go through it quickly.
I pulled an Üter and ate most of the After Dinner Mints before the photo below was taken, then devoured all but the chocolate parts which touched surfaces. I was so stuffed with chocolate all I could do was sit there and read labels. 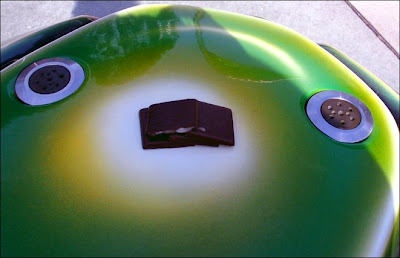 The After Dinner Mints, 58% cocoa, were one of my favs, and quite addictive. They were the first to be released from their holding cell in the fridge, and tasted even better warm and disgusting. Did I ask for 80º weather in September? No, I didn't, but I'm asking for it now—pleassseeee. 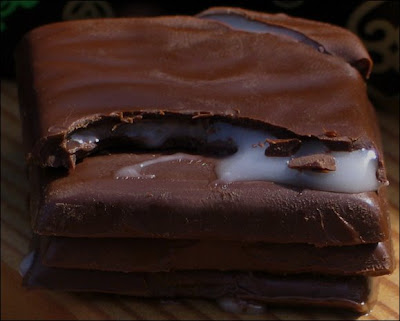 The White Chocolate With Strawberries contains no fiber or cocoa mass, but has real strawberries in the crisp. I found it too sweet, as white chocolate tends to be, and a little sexy. 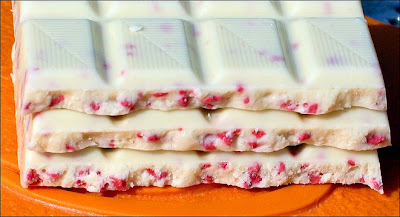 I liked the Crunchy Milk Chocolate, 27% cocoa, best of all, and not being able to control my Caligulian appetite, barely took time to breathe as I scarfed it like a dog.
A dog I tell you.
I liked the Hazelnut Milk Chocolate, 27% cocoa, least of all, finding it dull and full of hazelnuts. But the calcium in this bar had a 10% daily value. Makes you reconsider your breakfast choices. (I wasn't kidding about not being able to do anything but read labels after feasting on the flesh of chocolate.)
A Ghanan cooperative is responsible for the aromatic and savory cocoa. The Divine story and more fairtrade information is on their Web site and inside their wrappers, do your own research. I've got bits of chocolate to lick off my desk.
Dished by Jeanna on Wednesday, October 01, 2008